Don’t get caught up in business perfectionism. Get it done!

Business perfectionism is such a trap. yet we all know when it comes to your business, done is so much better than perfect.

I see you little business owner. I can see the whites of your eyes and the spittle on your lip as you consider your budget. The clock is ticking on the back wall. You feel the pressure in the bruised annals of your bowels. The weight of expectation from family and friends has hoisted itself into your collar, nibbling at your ear. 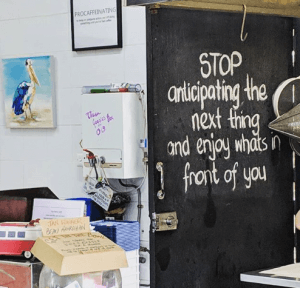 You only have a few precious chances at getting your marketing right. You are paralysed by getting it wrong. The cost of what you do is just as great as not acting.

Or so it seems.

But there is a reason why done is so much better than business perfectionism. Want to see what that is?

Invisible products do not succeed

What good is an idea, story, marketing campaign, kick ass logo or amazing business idea if it’s languishing in your journal? Sure, you can get an extraordinary buzz from telling the tales of your someday idea to friends over drinks, but there’s only so many times that can happen.

Think of all the crazy script ideas or adventures people tell you in a year that never happen. Dreaming is great, but if you keep doing it, nothing eventuates. Not only that, but people’s confidence in your ability to get things started erodes.

Take it from someone who has heard all manner of wondrous ideas from people that have never, ever done anything. All you are doing is blocking yourself up.

An idea is only as good as the action that follows. Less talk and more movement towards execution is what is required.

Indulging in business perfectionism means you end up with invisible ghosts of products that are never quite right enough to launch.

What’s the point in that?

There’s a beautiful innocence found in the inception and early stages of any idea. Whether it’s business or a creative project, a freshly laid idea holds promise and excitement. It’s what you do next that counts, though.

An idea needs a few things to stay alive. The time to grow and get legs, someone to look at those legs and plan for their strength, the opportunity to play and explore.

It needs less roadblocks and whataboutism and more ability to try and secure a foothold from the idea dream reality and in this world.

Once you begin to find little roadblocks to pelt at your idea’s head, the easier it becomes to keep throwing. The more you become accustomed to the idea and internalise its issues, the more it creates reasons to doubt.

All new ideas are risky. If they are any good, they often won’t have been attempted before. Giving into the fear because of your ideas difference will simply create more fear. You have to start testing the mettle of the concept in order to discard it properly if needs be.

Holding onto an idea doesn’t help you. It creates a cork for your imagination and stuffs you right up if you are not careful.

You cannot learn if you don’t try

In product management, you learn a lot by doing. You define, develop, deploy and maintain an idea. Each are as important as the other.

Very few business owners or creative people can survive off draft one of an idea. It’s a process of learning how the idea survives in the real world. You have to get your idea out there and maintain it. That means being able to learn from it as it breathes.

Business perfectionism stops you from moving on from definition and hampers development.

If you’re forever stuck at the definition stage, you’ve got nothing. You have no ability to get much needed practical research done. You can also over-invest in the magical properties of the idea and shut down any input that could help you. Or you’re forever tacking on the next cool idea someone comes up with when you tell the story.

Learn by doing. Test the idea on real people. Your assumptions can only get you so far.

Your standards are higher than your customers

There’s an amazing woman in Wollongong by the name of Jenny Briscoe-Hough. Jenny has her fingers in everything from the local Port Kembla music and creative scene to not-for-profit funerals. One of her mantras is that you don’t need to do 100% when 55% will do.

When we’re close in the fabric of our business and creative ideas, we often lose a sense of what is good or bad. Think about how many times you may have heard a writer, or a start-up founder say of their concept “I don’t know if this is the coolest idea or the worst”.

It’s because we emotionally invest in our craft. How could we not? It takes a lot of intellectual energy and emotional labour to build a new, cool idea.

At a certain point, Imposter Syndrome can push us to feel as though what we’re doing has little to no value. The more we overwork ourselves, the more we over-invest, the more prone we become.

If you’re spending a lot of time with an idea waiting for it to be perfect, you need to flip to the B-side of your brain record. Think about those times you loved the hidden track so much more than the radio single of your favourite artist.

Also, while you might love a favourite album, unless you are a complete music nerd, you don’t go through it line by line looking for every scratch. 95% of people are content with the whole picture. They don’t have to break everything down to granules, which is where the creator and their doubt is often living.

Put another way- do you critique the flour quality of the muffin you bought as a treat, or do you just enjoy the damn muffin? Business perfectionism caters to the super-nerds. This is the thinnest wedge of your customer base.

Get it right for the real customers instead.

Create instead of flagellate

Don’t push yourself to be all things to all people with unobtainable perfection. I cannot tell you how many times I have met freelancers and small business owners that are capable, creative and infinitely talented people that have caught themselves with perfectionism.

The saddest part of all is that perfectionism takes away the great work they do. It often makes you take yourself way too seriously. That in turn drives out snappy behaviour, burn out and idea paralysis.

And for what? To build an extra 30 to 40% into an idea the majority of people will never notice? Ease up, little creator. Don’t put so much pressure on your ideas that you trample them before they get to grow.

If you’re stuck torturing yourself with business perfectionism, you need me. Uncover my business coaching, get in touch and let’s get you moving.