I was lucky enough to score a free ticket to the recent Vivid Sydney’s Powerup your Games Startup. In typical marketing nerd style, I spent a considerable part of the proceedings taking notes and tweeting away. Beyond the chance to indulge some content creation and some game loving, here is what I found. 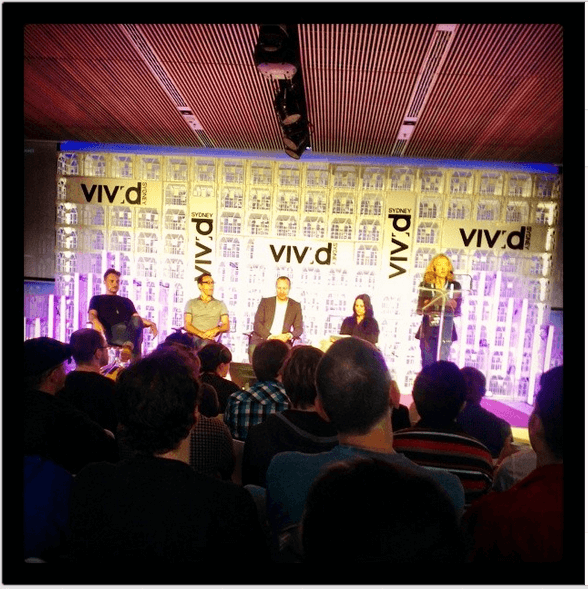 Proceedings began with organiser Screen NSW addressing the recent cuts to funding. As a fund that has been the beacon of light to indie gaming in Australia, the news couldn’t have come at a worse time for this particular event.

Monica Davidson (of Freelance Success fame), who acts as an advice line for small businesses via government subsidy, addressed this concern by highlighting an important fact:

“If you rely on funding, you are not actually in business.”

While I agree with Monica in terms of small business and general business based practice, it’s hard to ignore that gaming is a creative and startup amalgamation. Both arenas often require significant funding and outlay to become commercially viable at a later date. And both also teeter precariously between high failure rates and the requirement of creative control in order to create a product that captures interest later on.

In freelance, you can basically bootstrap yourself to glory with a laptop, a mobile phone and enough money in the bank to cover bills for the first 4 to 6 weeks of operation.

With a gaming startup, you have to consider designers, developers, writers, programmers, and support staff such as community managers, customer service and marketing.

So where a freelancer can get away bootstrapping from their living room with maybe $3K with significant change left over, a game could burn $30K (if not more) in the same period of time. It’s not unheard of a functioning gaming startup with a team of 20 essential staff to burn 100K plus a month.

So yes, there comes a point in time when you are in startup and creative ventures where you have to make money for yourself in order to be viable. However, it can take months if not years of labour and work in order to have a product to release to market. And in those stages, or in stages where growth demands expansion into unchartered markets, life without funding becomes quite difficult quite quickly.

As one of the panellists so aptly put it (Nick I think?), “take what you think it will cost and times it by 5.”

Perhaps the better point would be “make sure you use what funding you receive in a strategic manner so you can become sustainable quicker.”

Get your small business house in order

An audible groan came from the back line of seats at the event when conversations about having ABNs, registered business names and tax in order. I guess that’s because 50% of the crowd were people who had jumped that hurdle light-years ago and had slightly bigger fish to fry.

However, it does bear reminder and repeating- you need to approach a startup business seriously.

As much as they are a pain in the neck, you do get further through having a marketing plan or business plan as a backbone. The reality is (as some of the panellists working in the gaming industry highlighted), most of us don’t take the time to get these sorts of things ready until it comes to crunch time. Like when it’s required for a funding application or Angel investment pitch.

Flying without some kind of marketing plan or strategic view of your business isn’t new. It’s a common failure and a failure that needs to be addressed.

The startup catch-phrase ‘fail fast’ doesn’t mean shipping products that are barely passable. But it is about testing quickly in the marketing and not, as Holly Liu from Kabam so succinctly put it spending significant time “polishing a turd”.

As Nick put it, you need to ask yourself if your failure to launch is indeed procrastination. We all get worried at the moment of launch and there is always something that can be done to create a stronger offering.

The value of having a product that is alive and kicking while you learn from its journey and customer acceptance cannot be understated. Sinking time, resources, energy and cash into a product that you don’t know will garner the interest it requires can lead you to a very dark place very quickly.

Here’s the harsh reality. An estimated 90% of startup ideas fail. The best analogy to date in relation to startup is about birthing a blue baby. You have something there that you need to bring to life. And time and how you approach it is critical. You’ll work your bum off trying to bring it to get its heart started. You’ll have to make some pretty hard decisions, many other people won’t understand. And you’ll need to be smart enough to know when you can see a spark of life, or when to call it if you can’t.

That’s incredibly hard to do if you have been working on something for 3 years and promised a lot of people a lot of things.  I tweeted during the event that 3 years seems like a hell of a long time to build a game in the hope it will work, especially when your team is working for equity. And I stand by that statement.

I’m not trying to be a jerk, I simply can’t ignore the facts.

Gaming is a particularly challenging space all of its own. You face the challenge of not only technological advances but also audience shift. This is why console developers shift their product in months instead of years, and app developers build in weeks as opposed to months.

If you have the cult following of Grand Theft Auto, sure, take your time. But if you are bringing an unknown property to the market, be prepared to pivot often and pivot quickly. Something that is incredibly hard to do when you have 3 year s of talent and work to move in a new direction.

Story underpins gaming. It’s not the difficulty of the level that sees us making our 599th attempt to crack a level at 4am, it’s how much we’ve invested in the story and the aims of the game. The addictive quality comes from recognising exactly what needs to be done coupled with the right amount of challenge and allure to make it enticing.

Trailers matter for capturing the essence of your story. Tell me about the bunny that gets it if I don’t pick up the carrot gun. It’s simple, but effective story telling. Clip shows and screen grabs don’t hit my tickle button.

Go old school. Think Balder’s Gate, Dungeon Keeper, Tomb Raider or The Sims. Make it very clear what the heck you want the gamer to do and hit those emotional triggers hard for your long plays. For your Apps, spend some time studying Jet Pack Jinx, Candy Crush or Zuma. See how easy it is to understand the challenge, the focus of labour and the reward.

It’s all a framework of:

ACT 2     = Establishing the vision/how it should be done

Anything harder or more obscure than that and you’ll lose people. You don’t have to have the most original game to be successful, but you do need a good clean story. And don’t lean too hard on the Disney button, please.

Having the right person, not just the right skill set matters. Especially if you are pushing tin uphill against deadlines, coding and whatever else you can throw in the mix. Some great suggestions were to design the work around the people, to recognise that some people love critical thinking time alone and others need a team to bounce on- and that both are equally valid and important to creating work that you can be proud of.

Holly Liu was a relaxed and interesting presenter who brought a wealth of experience to the show. I felt the panel was dominated a little by one gaming house’s point of view, which gave us a skew towards pre-launch activities as opposed to what it’s like to be out there, playing the game and competing in a very aggressive marketplace.

Perhaps a local seasoned Battle Cat form the Australian scene was needed who could rein it in and talk challenges beyond launch. Or perhaps the design of the event needed challenges overviewed from what Screen NSW understand and can share about their applicants and where they have reached. I am not really sure. Perhaps it simply was a panel that could have done with another hour to really dig in and get the story out.

But what is clear is there’s no right or wrong way to release a game, but it’s not all beer and skittles.

Planning is important, culture is super important, attitude and what you ask of the people you work with needs to be in-line with long term goals, and you need to create a story that plays within an engine, not an engine that hopes to play as a game.

To all the future indie gamers sitting with shiny faces and amazing dreams, I say thank you. Without you, I wouldn’t have my stress relief apps and late night gaming obsessions of the future.

Hats off to Vivid Sydney and Screen NSW for coming together to host an interesting and entertaining event. Powerup your Games Startup not only proved to be an interesting topic, it also demonstrated that the gaming scene in Sydney is live and kicking.

Now get out there and kick some serious game butt.

By way of disclaimer: I have been the contracted Creative Writer for Bubble Gum Interactive since 2010. I’ve worked on virtual worlds and app gaming, and prior to this role, helped look at fun marketing campaigns in SecondLife.  These are my opinions and don’t reflect those of employers past or present.