Unsolicited advice is the bane of the business world. There are so many informal (and uniformed) advice givers who believe opinion is enough. But it’s not. It’s especially not when it’s not paired with the listening, investigation and understanding required to make sense of a situation. 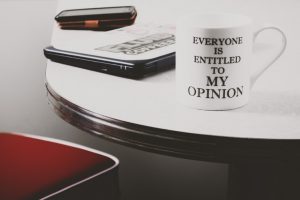 Photo by Steve Johnson via Unsplash

Yet we often accept unsolicited advice and rarely question it. Sometimes, this is due to our shock at receiving it in the first instance. For women, it may come down to conditioning or not wanting to be perceived as being difficult. People within minorities such as the disability community or BIPOC, it may simply be exhaustion at the thought of yet again spend emotional labour educating someone in your experience. It may simply be the power structure with the person giving the unsolicited advice doesn’t allow for us to question it safely. Or it may be simply a moment of picking and choosing your battles.

Yet the five-minute expert isn’t ever going to learn if they continually get let off the hook by silence or us being caught off-guard.

1) Have you got experience with this kind of work/issue/solution?

The value of any form of coaching, counsel or “you should do this” moment comes down to how deeply a person has thought about it.

Advice is like dandruff. We’ll drop that stuff everywhere if given half the chance.

It might seem like an ego thing but it’s usually a lot less malicious than that (unless a person has history of being a force five blowhard, then all bets are off).

We love to be able to solve the world’s problems. It’s built into that big squishy problem-solving computer located in our heads. The trouble is, it often makes us gloss over the facts and figures we need to make a proper determination.

Similarly, we can get a little taken aback with unsolicited advice and it might trigger our shields. It could be a lost opportunity to strengthen our idea or gain insight.

By qualifying the experience of the advice giver in relation to the problem, we ask both parties to think about the interaction. That means it slows the process down enough for the critical thinking parts (not the ego parts) of the brain to engage. And it qualifies the advice so that you as the receiver can determine whether it’s worthwhile exploring further.

2) Do you have any examples of that working for someone else?

When someone is giving you unsolicited advice from the perspective of the “it worked for me” perspective, there are a couple of things to consider.

First of all, their experience may not at all be relative to yours. You may face distinct challenges they have not. There may be privilege, relationships, access considerations, differing research outcomes and all sorts of other stuff that change outcomes between two people doing the same thing.

Also, most people using themselves as an example for how to do something correctly tend to overvalue their success. It’s a natural tendency to up the ante when attempting to prove we’re right. But it does tend to get in the way during “straw poll of one” moments.

What this question aims to clarify is quite simply whether the person giving the advice outside their personal experience. And if they are, whether the success has been replicated. That replication can be proof that the idea warrants further consideration.

3) Have you done that for your business?

While you’d think this is covered in question one, there could be subtleties to consider.

For example, if the idea is executed as a job for an employer. People that implement or sell an idea or even experience it at workplace level may not have travelled as far into the bowels of the ship as an employee who witnessed the idea coming to life.

Maybe the idea is being applied after a lot of compliance, mechanical building, thought or work the person espousing the idea’s merits may not be privy to. Or perhaps it involves a lot more risk and careful planning the unsolicited advice doesn’t cater to.

It doesn’t mean the advice is without merits if the individual hasn’t personally had a stake in it or had their business butt on the line. But it does help you make an informed decision about the advice itself.

4) What do you perceive are the negative consequences of not taking your advice?

I know this sounds like a pointy question, but it’s a fascinating way to shut down the well-meaning detractor while also getting generally intelligent people to reflect a little deeper on an idea.

When someone can see the issues, sometimes they step away from them. They may couch their unsolicited advice as being a nice-to-have when in reality, they might actually be saving you from a mistake.

It’s interesting that when it comes to input with business ideas, people tend to coach away from giving tangible negatives they see. Perhaps it’s a situation of not wanting to scare the courage out of someone. Or maybe, it’s stepping away from risk and responsibility.

What it does is it immediately separates the people who may have strong opinions (but no real clue) from the people who have genuine insight that might be afraid to speak up.

This is especially worthwhile a question when you are working in workplace teams with freelancers. Freelancers often have insights and experiences that outstrip what you may gain in a traditional setting. Yet we don’t want to seem like the person coming in to rain on everyone’s parade. We don’t want to question long-held beliefs. But that outsider perspective is often a rich, invaluable source of insight. Many workplaces could benefit from the fresh pair of eyes.

Asking this question helps you determine whether the confidence to back convictions comes from cultural concerns or a lack of belief.

5) Every approach or idea has some risk attached. What are the risks involved with what you have just presented?

If ever there was a way to qualify an idea, it lay in the ability to look at it from a risk and reward perspective. Risks help us work out whether an idea is worth pursuing.

In the context of unsolicited advice, asking a person whether they’ve considered the risks again gets them thinking about what they’ve said. It also gives you, as the person who has been through the process of research and development, the opportunity to compare what you know.

One of the biggest issues with unsolicited advice is that it doesn’t account for what has been explored but discarded. It doesn’t account for the ideas that start off looking possible but prove themselves not to fit with budget, time, framework or intent. Identifying risk is a perfect way to frame this.

Advice givers don’t want to hear “we thought that and it kind of sucked once we dug deeper”. But they can usually cope with the idea of risk reduction. Especially if they are competing departments within the one organisation. Try it and see!

6) Are you OK with being liable if I follow your advice and it backfires?

Oh gosh yes, I know! This really can be a last resort. However, if you’ve got a know-it-all that really wants to keep shaking the idea rattle at you, it can stop them dead in their tracks. At least for a few minutes while you regroup, anyway.

There are softer ways to deliver this question. But the bare bones should remain. And those bare bones are that if there are consequences, who will carry them.

This is something we all need to realise when giving advice, unsolicited or otherwise. The person creating, doing or asking will ultimately be responsible for the outcome. They will have to carry the time, energy and money lost. If something drastic happens, it’s their butt on the line.

Most of the issues with business advice in online groups, networking events, or in the corridors of business is that the person with the vested interest in the success of an idea is also the person who has to mop up if it fails.

Recognising that our unsolicited advice might be a five-minute throwaway conversation on our part yet be something that drives a person to make some huge moves and big choices should never be forgotten. And if we’re not willing to be accountable for the outcomes if they are bad, perhaps we should reconsider how important it is to have an opinion.

We can’t always be right. To think you can only give advice if you are sure of the outcome is as limiting as it is unachievable. However, at every opportunity we have to share our thoughts, ideas or beliefs about a subject, we should do so with the impact in mind. And we should do it with care for the person asking the question instead of making ourselves feel useful at the centre of it.

Want to add more critical thinking to your BUSINESS ADVICE? Skip the on-the-street unsolicited stuff and TALK TO ME TODAY.