What social media hashtag haters don’t really get it 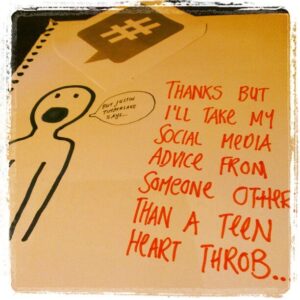 All it takes is a video of a celebrity bagging out tags and everyone who’s never quite gotten used to the Facebook crossover into what appears to be a Twitter thing and everyone’s high fiving each other over someone finally telling it “how it really is”.

So why should we persist in using them when so many people can’t fathom how to use them?

Because we need them, that’s why.

To explain it to all the people out there who don’t quite get what tags are for, here’s your guide to getting with the tagging programme when using social media.

A case for purely geeky reasons

Back in the day when monitors were green and gold, and you played games in virtual worlds called MUDs and MOOs through reading heaps of text, channels were set by using hashtags.

You could create your own private channel on a BBS or on IRC to invite your friend to have a chat. You could set themes for discussion and topics via that nifty little tagging mechanism so like minded people could see what you were discussing and join in.

Some people haven’t been using community online for as long as some of us, and that’s fine. But if you’re in anything remotely marketing, business or social media related, it’s a great idea to lay off the “man I hatez them tagz” comments.

To anyone who was kicking it back in community social networking in the 90’s, what you may actually be betraying that you only understand internet community building from the “now perspective”.

Tagging has a functional reason. It creates virtual channels of communication so people with like minded interests can find what they are looking for. It indexes information to make browsing outside the people you know easier. It’s a form of search, yo.

Any geek worth their salt may not like tags creeping in to now, but they’ll get it from a functional level. And to them, your complaints about tags may be as obscene as a tourist complaining that sushi isn’t cooked in Japan.

We tag stuff IRL too

Graffiti artists to let the rest of the world know a piece or territory is theirs. Artists sign their works so we know it’s their creativity. We have signatures to let the world know we’ve officially signed off on things, and every single thing in our pantry has a label.

We want to know (or leave behind a message) that says a particular thing is what we think it is. We want to be able to find stuff and identify it.

If you don’t stitch your kid’s name inside their school jacket, what happens? They will (9 times out of 10) lose their jacket and have no way of finding it again. They suck at identifying their stuff in what seems like a sea of the same thing.

Tagging on the internet is no different. It creates a point of reference you can return to, follow, find out more about and join in on. It’s a marker like a name tag in a jacket just as much as it is an address for bringing people together.

Finding stuff on the internet is a whole lot easier when it has a frame of reference.

Text language, smiley faces and meme generators – and you draw the line at this?!

If smart phones saved us from anything, it was our friends sending us texts that lacked vowels, crammed letters together to make sounds and looked like the script reading for “Mad Max Beyond the Thunderdome”. Seriously, I used to get texts from my sister that looked like a cross between ASIO code and teenage nightmares- and she’s ten years older than me!

But think about it for a moment.

We accepted abbreviated text, acronyms and textlish to save time and text space. We accepted the smiley face to show our emotions online to the point where there are hundreds of short key combinations that make everything from frowns to dance moves. And we’ll cheerfully send around crummy memes to the cows come home because it explains how we feel.

But a word or two with a social media hashtag? OMG! Heresay!

C’mon guys, honestly, what is up with that?

And when you think about it, is it any different to tagging your mood, the place you’re eating at or showing people you LIKE a certain fan page or comment?

After how far we’ve come in internet communication and social media, it seems a little bit silly to dig your heels in at the #tagging stage, don’t you think?

If you’re change resistant, it makes you look stupid

And I’m sure they’re really enjoying doing business on their typewriter via the postal service.

But they’re few and far between.

Look, social media tags may not be as game changing as the invention of the internet or the microchip, but sitting with a squelchy bottom plant in the middle of the super information highway crying your eyes out over tags not working for you when you don’t know how to use them (or aren’t in an industry that sees them as beneficial) doesn’t make you look like the cool kid on the block.

It just makes you look like the person who doesn’t get how important any form of internet search capability is.

If it isn’t for you, that’s fine. Don’t use tagging. Just like some people won’t read a book, exercise or look for a job they actually like, we all make choices that work best for us.

Most of the people being heckled by the haters are expressing themselves. Or they are trying to reach out to people who share the same point of view.

Personally, I love being able to find things on social media from people outside people I know and follow already.

Why is that such a bad things?