Have your voice heard in the Australian freelance survey now

Yes folks, the Freelance Jungle survey is happening again in 2016! 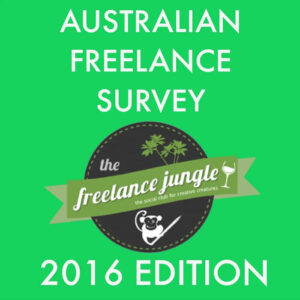 In 2010, I conducted the first Australian freelance survey. Well, the first one designed to see how we were doing as opposed to identify the sales pitch, anyway!

I became curious about the state of the Australian freelance market. I wanted to see if the sorts of issues and challenges I was facing in my first year of freelancing were shared by others.

Anyway, I found it difficult to find the answers I sought. I rang all manner of government department and Google’d until my fingers looked as though they were in need of fingerprint resurfacing. I finally got hold of someone inside the ABS who said (basically), while we collect data on Australian freelancers in the Census, we don’t really do anything with it.

From that one open and honest statement, I realised just how much of a challenge the Australian freelance industry was facing. If there wasn’t even an Australian freelance survey being used to spot trends, strengths and weaknesses by the ABS, who really knew what was going on? And if we didn’t know what the issues and challenges were, how on earth could we support people?

I did what every hip cat in 2010 did to get attention, I shared the hell out of the survey on Twitter and Facebook.

160 shiny freelancers shared their story with me, warts and all. You told me about the challenges with non-paying clients, the management of workflow and an awful lot about isolation.

In fact, it wasn’t the bad payers or the odd panicking moments of no work that caused the most dread. It was that sense of being alone and bearing all of the responsibility that was getting to most of the freelancers who responded.

On the back of that survey, I launched The Freelance Jungle, an online and in person social club for freelancers to come and meet, drink, eat and talk.  Because you were sick and tired of high sales focus network meetings, I created something that was about making genuine connections and being real.

Because you wanted people to share things with, to ask questions during the day and get information on the fly, I set up an online version of the Freelance Jungle. I also did this to bridge the gap with far flung cities and the amount of regional freelancers who responded.

And now, because it’s been a while since the research was done and because I can see the potential for a new set of challenges that might need addressing, I am repeating the survey in 2016.

The main aim of anything I do with the Freelance Jungle is to alleviate stress, learn from and engage in healthy, supportive communication with fellow freelancers. This is a “you’re among friends” situation.

The survey aims to collect your happiness and pain points and see what you need to enjoy freelancing more. Or if you’re having a blast, to see if there is anything we can share with other freelancers to create more of the same.

I have a couple of ideas for the future of the Freelance Jungle to help build upon what we do. But just as the first layer came from your responses, so too should any future plans come from what I learn from this survey. And no, I’m not some cynical jerk trying to find out a way to sell you stuff you don’t need. My intentions are genuine and community orientated.

Also, I am keen to see if there have been any significant changes in what is good, bad, indifferent and downright dirty about freelancing these days. The industry has grown and with it, a bunch of new ways to get work, become trained up and so on have flourished in the marketplace. So I’d like to see if the challenges we face have changed and if so, what the next support focus should be.

As mung bean chewing hippie as it sounds, I am an Australian freelancer so I want to create a sense of community for us all. I want us on the radar. I’ve spent the last 6 years speaking with all kinds of freelancers online and off. There are some pretty tricky situations happening out there! The 2016 re-run of the Australian freelance survey is about once again capturing that information for the good of the community.

I want to advocate for proper support for our industry and for things such as mental health, development and professional recognition. To actually measure the impact of cheaper bidding sites, and create a repository of shared information we can all benefit from.

Yeah, I know, right? Pass the hypno-toad and the hemp shirt! Honestly though, I want to know what is going on in the Australian freelance community so we can come together and make it better.

Want to join in on the fun of the Freelance Jungle?

You can find us online on Facebook in a private group. And/or join in the regular face to face Meetup in Sydney, Wollongong and Brisbane. We also have the odd event in Newcastle, the Blue Mountains and Orange as well.