The anatomy of poor communication between client and freelancer

We like to think there is such a thing as common sense or decency or business courtesy. Unwritten rules that guide, that sort of thing.

Guess what? These things do not exist. 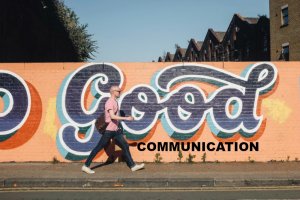 How messages get transferred from one person (sender) to the other (recipient) relies on 6 different signposts to be clear.

There’s a lot more to it than some unwritten rules nobody shares.

When it comes to communication, we often think we have it nailed based on our own perception and how we expect it to go. But there’s so much more to it.

Here are some of features present in poor communication

You assume someone understands you without qualifying whether they do or not. Where do you think the culpability lies?

“I assumed…” is the most common thing heard during a communication breakdown.

“I thought you understood the brief…” but this was not checked or questioned.

“I wasn’t sure about XYZ part, so I had to wing it…” and this ends up in a tangle.

There are many ways this story plays out.

If you assume without checking, you are opening the door to a big mistake through a lack of shared knowledge.

How you avoid this is through (but not limited to)-

Ego, the fear of asking questions, guesswork and working outside capability invite assumption. Failing to brief (or failing to follow it) compounds the folly.

Aim for good communication by deleting assumption from your processes.

There’s a mismatch in the relationship

You’re trying to communicate and you’re holding onto your preconceptions.

E.g. the freelancer is uncool, client is lame, or the boss is old-fashioned or the office junior is wet behind the ears.

Good luck trying to work together.

Clients, freelancers are your equals. They are not unemployable or under-educated. They don’t need you to tell them how to be in business. Or to project your concerns about the industry on the individual you’ve chosen for the work.

They are business people who have chosen to craft their career differently to you.

Freelancers, you are being asked to respect someone else’s business and ideas. They are letting you in on an intimate level. They’ve been vulnerable enough to ask for help.

Don’t throw that back in their face by taking the jobs you cannot do or treating their project with contempt.

The is no power difference. You are both business people trying to do the best you can by the project at hand.

Viewing your relationship as one of shared intentions brings people together. Equality means you can communicate better.

This is often demonstrated in-

Everyone wants to feel valuable. Make this a part of your working relationship with freelancers and clients. You’ll both enjoy the difference.

Humans suck at allowing time, money and resources for the things they care about. When it comes time to undertake a project that relies on all three, it only takes a failure in one for things to fall down.

Don’t be the client that comes with no budget and the promise of delayed glory, future riches or extra work to get you over the line. You have to take your project seriously enough to invest in it. We’re meant to follow your lead, not take one for the non-existent team.

And freelancers, allow yourself the appropriate time to do the project. That means without late nights, weekends and all-hour stints on a regular basis. You are your best asset. Protect it. The quality will improve as a result.

Poor communication comes when you don’t allow enough time, budget and resources. Mainly because you don’t have enough time to communicate well. It pushes you to problem-solve on-the-fly, which often doesn’t happen if you’re already short on time. You also cannot use your resources to the best advantage.

Always remember that a reduction in time, budget and labour will mean a reduction in scope. Scope reduction is fine, too. You can test with a minimum viable product, a beta campaign or short campaign.

What you can’t do is see if these things work if you half-ass all the things. That’s the difference.

Feedback is replaced with criticism

As soon as you start laying blame instead of searching for a resolution, you’ve lost the ability to lead. Yet in this world of shooting from the hip machismo and telling it how it is, somehow, it’s become OK to be critical.

Criticism, especially loaded criticism filled with blame, is not positive. You won’t get your best work out of someone if you humiliate them. Doubt doesn’t power people to greatness.

All humiliation does is damage a person’s connection to your business or project. You make them resent you and/or be afraid to try and do remarkable work due to concerns about criticism.

When you give feedback to someone, it’s about looking at the work and the person and how they work together. It’s not about your frustration at having to edit typos or it not sounding like what is in your head. Or about your feeling like you’ve had your freedom ripped away from you by not getting a magic potion.

Feedback is about outlining areas of improvement.

This also means looking at feedback as-

Feedback is not an exercise in fault finding and blame. It’s not about giving you catharsis if you’ve allowed negative emotions to overtake you.

If you choose to criticise, you’ll create distance. You’ll also hurt another person’s capability to address concerns. You invite self-doubt, resentment and fear.

What’s the point of doing that when the aim is to get the project where it needs to be?

The final thought on poor communication

Don’t set your projects or working relationships up to fail. By this I mean poor processes and handovers that lack information. Or fear of asking questions or qualifying both your intentions. Don’t complicate things not giving feedback until too late to do anything productive with it. Allow for time to be able to do the project. Plan for success by writing the brief. Be available. Allow space and time for revision.

We are all too busy these days. How we allow that busy state to impact others will determine how well we communicate. It also defines our opportunity for success. And the value of what we produce.

In all things, make room for collaboration.

Don’t set yourself up to fail by making poor communication a feature of your working life. Life is tough enough without getting the basics right.

Want to flip the switch from poor communication to the good stuff? Get in touch now.