When COVID-19 struck where were Australia’s business continuity plans?

Can someone please explain to me why we’re missing so many business continuity plans in Australia?

If you’re not familiar with the term, business continuity plans are meant to help with disasters, disruptions to business and infrastructure failure. You activate them if something goes wrong.

The most recognisable versions of business continuity plans are social media disaster plans, or the contignency plans used by large-scale events management teams. The aim is to have everything written down and a plan to activate in the event of a disaster. 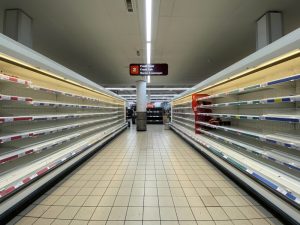 Photo by John Cameron on Unsplash

Defining disaster can be everything from disruptions to supply chains to terrorist attacks. It might be communications plans that deal with overbooking issues, websites falling over or what to do if a product fails. You use them in events to plan a contingency in case of foul weather, changes to suppliers or last-minute issues. And of course you have social media disasters like when the boss gets drunk and makes a bunch of flavoursome comments, if the tide turns against your company or when you put something out online and it gets newsjacked by a story that creates issues.

The idea is to have a plan you can activate. And have the accompanying messaging, delegation of tasks and mitigation of risk mapped out and at the ready.

If businesses large and small are using them, if they are the mainstay of events, and they are almost natively built into every new piece of software or website testing process by companies delivering large scale solutions, why is Australia suffering as much as it is right now?

Australia, where the bloody hell are ya business continuity plans? Let’s look at your missed opportunities for contingency plans and making this functional

Knowing the lay of the land is vital to good planning.

I have to ask: Why didn’t someone check with the Australian Bureau of Statistics and recognise that the volume of hospitality and arts workers together with Australia’s casual workforce would lead to Centrelink having a service meltdown?

Virtually and physically, Services Australia has been inundated. Where were the contingency plans needed to ensure people didn’t line up?

But any geek worth their salt knows this would be the case because we have the data on these sectors freely available through the ABS.

Asking people to line up for welfare after the website crashed missed the enormity of the situation. It also sends a message that undermines the stay away from each other and stay at home directives. Not to mention puts people at risk by exposing them to the shame attached to being unemployed for a lot of people for the first time in their life.

What could have been done?

Changing the attitudes to technology

It comes as no surprise that Australia was in a mad scramble to get telehealth and tele mental health up and running. While the services have been pushed for and even existed in various forms for at least five years or more, they are not promoted. In fact, some people say they have been actively discouraged. They certainly haven’t been enabled before now to their full extent and it cost us time.

The same goes for the school system. The holidays are early so the systems can be implemented for public education.

On an emotional level, honesty and clarity would have helped parents enormously. This could have been enabled via dedicated messaging systems and alerts. Instead, parents were made to languish for days and anguish over whether or not to send their children to schools. Explain that you need nurses at work, and they need to put their kids somewhere. People understand that.

What they don’t understand is “schools stay open but make your own decisions.”

Our attitude towards technology in this country leaves a lot to be desired. The Australian Public Service isn’t online because (rumour has it), they’re not sure how to do it. Zoom has become a multi-billion company.

I am hearing from freelancers and direct employers with the tiniest bit of understanding they are stepping into IT roles and mobilising entire workforces because no one knew what to do.

Remote work has always been seen as a fad or something you shouldn’t attempt because you can’t control your workforce. Yet we will come out of this knowing it is both practical and useful.

Oh, coronavirus and the NBN? Jinkies. Yes, many countries have had to ask the streaming services to factor their content to cope with an increase in usage.

But we know Auistralia’s NBN has been a craptastic internet system glued together by denialism and hubris. It doesn’t compete on the world stage and it is likely letting people down, adding to already strained circumstances.

The fact that none of these situations had business continuity plans regarding the internet usage to fall back on is staggering.

Seriously- under a conservative government with concerns about terrorism (at least every election), why did nobody think about the moment where we may all need to jump online? We may not have seen COVID-19 coming (shhh SARS scientists! Put that Zika leaflet down, Doctor!), but surely the digital vulnerability is assessed when these major projects get rolled out?

And if not, why not?  Why aren’t we recognising that with each layer of technology comes the potential for disconnection? We need business continuity plans that cover that. We need contingency plans that are reviewed at a minimum annually to spot any issues.

If it comes from the private sector, so be it

The supermarket crash bemuses me. How can two giants in logistics and warehousing with online shopping end up having to order people in-store to get toilet paper?

Here’s the thing- if you have properly setup inventory website, you should be able to:

Again, this is a normal, everyday function of warehousing and fulfilment. Beyond people that seriously cannot work out how to use technology to save themselves, there is no reason we should not be able to order groceries online.

And the business continuity plans should be able to be activated to stop the hoarding.

I worked for a company that fulfilled print assets at retail store level for four years. It was not unheard of for our team to fulfill orders of major displays and promotional campaigns to 2000 stores nationally while also hand delivering printed invites to a private house’s mailbox in the same week. That’s with one person running point and another three people (if we were lucky) doing that. Most of the time, it was good old me.

Delivering food to the entire country is a much larger scale. But a national inventory with seasoned experience in logistics and warehousing should be able to tweak their system to make online ordering their primary focus.

If it was money, can you honestly say the major supermarkets couldn’t have found the budget to pivot? That the government couldn’t have found funding to help them do just that? Surely there is are contingency plans within each of these large beasts to maintain supply that could have been adapted?

When you have a situation where inventory is being ripped out from underneath you, the better place to have it is online. Because you can spot abuse quickly and effectively.

Consider the arguments for cancelling online shopping as though you were writing the business continuity plans for a major supermarket:

If you have an online system that gathering all your stock movements, has delivery in-built, cross-tags customer information and can read people’s orders to ensure they are spending on their usual patterns, why not use it?

I’m not suggesting anything I haven’t seen work previously with customer relationship management systems or warehousing and logistics inventories.

The only thing I can think is that we simply shut everything down the minute we get a problem. And that we’re vulnerable to problems because we lack the wherewithal to use business continuity plans and contingency planning as it’s meant to be.

Or we’re so caught up in bureaucracy that if it doesn’t come from government, government is loathe to use it.

Either way, what the hell, people?

You don’t need to be running government, a department or a supermarket to understand why business continuity plans are useful.

What seems to keep people away from them mostly is that we get oddly superstitious about it. We think having a plan for when things hit the fan tempts fate. Or it’s a waste of money if we build for troubling scenarios that never eventuate.

The problem is things we do not expect happen. Burying our heads in the sand or thinking everything you build must be applied at some point to be useful is pretty basic, short-sighted thinking.

You plan so you never have to use the plan. But if you do, you’re covered.

None of us are able to take some Die Hard style approach to saving the situation. Especially when they are large-scale.

That’s why critically assessing and plotting out the what if/then that moments in business are vital.

Along with getting over our fear of remote work, I really hope we learn that business continuity plans are just as much a part of business or governance as yearly forecasts or business plans.

Want to stop running around without a map? Get me to write your business continuity plans now.