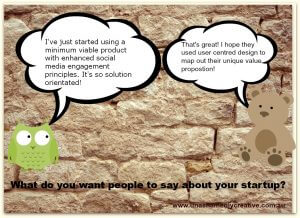 You know those startup buzzwords you have on your website that sound great when you’re at a startup conference or pitching to investors? They confuse the hell out of ordinary people. Your solution-orientated MVP with its unique value proposition that combines UCD and social engagement principles to encapsulate viral potential is basically shouting “hipster, nerd, alienation” in giant red angry letters.

This is really what customers hear when you speak startup jargon!

Everything is Solution Orientated (unless it’s made by idiots)

Customers come to you for something beneficial, so of course your product is “solution orientated”. If it isn’t, it’s not really a product for a customer, is it? The very fact you have to point it out as a feature in your copy puts that in doubt. It’s not a feature, it’s a given!

Nor do people Google or put call outs on their social media asking for “a solution orientated answer to my problem of getting lost”. Instead, we usually write “GPS app for iPhone” or “I have the sense of direction of a drunk pirate. Does anyone have an iPhone App they can recommend?”

Share what your product does and what it is a solution to instead. That’s what people care about and it’s what they look for online.

Unless you’re a football coach, lose the MVP

Minimum viable product is great for nerds and geeks to understand it may not be the full feature set yet. It shows you have big plans for your little idea, but needed to ship something out to see how things could go first. We know that’s smart thinking. That’s why it’s accepted and understood startup jargon.

To a customer however, this sounds like it’s barely going to do the job. Or it’s a football player who got an end of season trophy. MVP isn’t what people use in their everyday life and the phrase that has been chosen really only inspires happiness in those in the know.

When you slap MVP (or beta too), the non early adopters will wonder if it works properly or if you’ll be around to add any additional levels. It really does smell of the “we’re just testing right now, come back when we’re done” vibe. For most people, this isn’t enough incentive to give it a try.

There are a million other ways you can explain this.

Take it back to basics and use things like “stage one” or “first release”. Make it “version 1.0”. Call it your demo if that’s what it is. Prime it as a foundation for a larger idea you have- unless of course you are only talking to investors, early adopters and other geeks for testing purposes.

If it’s a consumer facing MVP, make it sound like the beginning of something that will grow, not the thing you cobbled together to see if the idea could kind of work.

Be honest that you haven’t quite nailed things yet, sure, but in a language customers actually speak.

The special kind of gibberish that is the unique value proposition

Unique value proposition implies you are a one of a kind, special thing that adds value. It’s the kind of startup jargon that is accompanied by horns blowing in the background and heralding a change in an era. But are you really?

I mean, spades a spade. There are very few things in life that can really wear the tag of unique. Most of what we do is a replication, adaptation or amalgam of an already existing idea.

I know it sucks because the word unique is very understandable, but so was gourmet- and look how that’s turned out. Stop molesting it, please.

Value, oh value, don’t the marketing kids love you? Back to the solution orientated startup jargon, value is implied right? Value is what ALL products give to people. Because you’re either making my life easier, or your saving me some money or giving back some time, which adds value. If you aren’t adding value to someone’s life, what’s the point of your product? Talk about stating the blindingly obvious.

Proposition is also a little naff when you take it out and hold it against the light. You should be beyond the idea of “proposing” something to a consumer if you are asking them to pony up some dough and take an interest in you. You should be handing them something a lot more concrete.

When you hold up UVP against the cold light of day, it really doesn’t say much to anyone who will use your product, so save it for the elevator pitch.

User Centred Design is hipster for “we over think this. A lot”

UCD or user centred design is a gorgeous concept whereby designers build around human beings when designing websites and Apps. Taking feedback from people, creating personas, learning from data and then building a website is smart.

But the thing is, (and I am going to be painfully obvious with this), if it’s designed by a human for a human need, its user centred design… because all websites are designed for users on some level. It’s just some design without making a massive deal out of it, and others do.

What works is the principle of knowing what your customer will respond to, and how to apply that across what you are building.

You don’t have to use user centred design principles to be able to pull that off. Actually, sometimes being enamoured with the philosophy means you get in your own way a little bit and don’t respond to ideas outside of the protocol when you maybe should. It’s a great methodology, but it’s not the Holy Grail a lot of agencies make it out to be.

Beyond that, even when you employ the principles of UCD in what you make, the average person won’t really care about it that much. They’ll just use it and succeed. They don’t need to know a term for it. They don’t need that in the description.

Customers think differently about your product than designers and builders. Highlighting that you are centring the design on a user sounds iffy to the uninformed. To a customer, a user is someone who sucks the life out of someone, or a person having the life sucked out of them by drugs. We don’t like thinking of ourselves as users because it has negative connotations.

Plus is makes the whole process sound mysterious and complex, which in most customers minds translates to expensive.

So planting that seed is a little silly, don’t you think?

Social media is not a lightning conductor

If you are building something online or via an App, please don’t fall into the whole “we harness the power of social media” throwaway line please.

Social engagement principles is what- social media on steroids? Mapped out social media that gets people talking about you all the time, every time? Sorry, I’m not buying- and I doubt customers are either.

Besides, unless you’re an actual social media provider, should you be claiming you are a product that provides the same level of engagement? You back end onto social media and make use of it to spread your content. But you aren’t some lofty lion tamer bringing Twitter to its knees for your customers benefit. You haven’t deconstructed the Facebook model for all to see.

You’ve plugged into a social media channel. Please calm down.

Besides, in the early days of your statup, walking into those waters when customers don’t know you yet is a little dangerous. Without a social media community that has a strong level of following, it’s easy to question if your product is worthwhile. I mean so what if you can share information on social media? If you don’t have fans and followers, it’s a fairly moot point, right?

It’s like freelancers that say they offer social media yet have barely any presence and rarely update what they do. It looks a little odd claiming you know social when you have no social footprint. It’s twice as bad when you’re carrying on like some mad scientist who has cracked the social media code.

Phrases like “harnessing the power of social media” have been done to death, and really mean nothing. Social media isn’t created at power plants and people responding to your stuff or sharing it on social media alone keep the lights on.

Why is it important to lose the jargon in startups?

Your startup idea is a new one that is hopefully aiming to solve a problem a customer has. Within that process, you already have to educate them on something that probably doesn’t exist. You have to slice and dice the market to create a new audience to sell to. You have sod all branding footprint and could be extremely lean on the influence and consumer endorsement side.

So you’re already spinning a lot of plates- why make it even harder by shrouding your concepts in even more mystery by speaking a secret little language?

If you want people to quickly understand what you do and be able to tell their friends, make it your mission to give them the language to be able to do that. Jargon doesn’t help in that process because no one likes repeating stuff they don’t understand. Or that they snicker at because they’ve heard all the empty words before.

A 3 step test for startup jargon-

2) Pretend you are time deprived and need to make a quick decision.

3) Can you understand what you offer, who you are and the customer benefit in 7 seconds?

If you can’t, you have a jargon problem.

Now check out 5 websites belonging to your competitors.

It might be easy to say “Oh phew, all the guys are doing it”- but that could be your niche, your competitive edge, in being the startup that makes getting the idea easier.

Or it may be horrifying to find out they have already worked out that communicating clearly with a customer is a much better idea.

Either way, if you have a jargon problem, tackle it! If you can’t translate your startup story into the language of every day consumers, find someone who can.

What startup jargon or other business speak buzzwords leave you cold?