How the Imperial at Clifton is making solid social media choices

Check out this for great hotel social media. I recently visited the newly renovated Imperial Hotel at Clifton on the Illawarra coast. It’s a historic hotel that spent time decaying with disuse since its closure in 2003 until the Shellharbour Club purchased it in 2015.

Many feared it would be sold to residential developers. But (with more than a few sighs of relief from Wollongong locals), a revival of the old hotel began.

And what a revival it is.

The hotel itself has a wondrous marriage between the history of old and the new touches that make a hotel welcoming. It’s really a wonderful architectural restoration.

One thing that stood out is they made social media marketing a central part of the interior design and the operations itself.

This can make all the difference in hospitality marketing when it comes to encouraging your customers active via your hotel social media. Here’s what I noticed.

The food and beverages beg to be photographed. Food presentation was a little unique. Although the side tin with wooden crate my partner’s fish and chips came in was a little out of “we want plates”, most other food we saw was artful.

You felt envious when the tiered seafood trays whisked past.  Share plates make you curious about what you might be missing out on. And even the oversized breakable crackers with the wooden cheese platter make it feel shareable and customised.

The presentation of my whiskey included the standard big whisky ice cube with a frozen rosemary sprig. And the drink itself came on a concrete serving tray and a wooden stirring dongle to create a nice contrast between stark and soft features of the hotel. 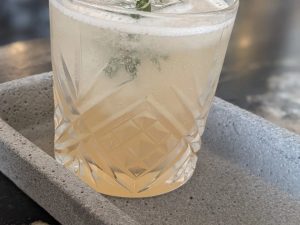 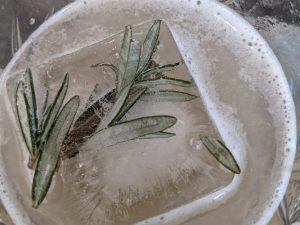 In short, it was easy to make the food and drink look good on the hotel social media because the presentation didn’t allow for problems. It invited curiosity and intrigue instead.

And that’s beneficial when people are a little fatigued by lunch time snaps.

The venue begs for attention

The interior design is in on the photography action, too.

An incredibly clever touch were the tables. It was like having the bar with each table with black marble. These surfaces with beauty of their own not only created an old-world feel. They made a fantastic Instagram flat lay. 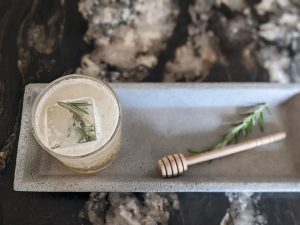 We’re talking the usual two- or four-person table. But not the standard fare. Here, there were super solid tables that didn’t scream pub. You felt as though you’re transported back in time to an elegant history.

It also made it incredibly easy to create social media photos fans and followers like.  Holding the customer’s hand and setting them up for the best outcome is a genius move if you want to let the social media do the talking. Or when most Google My Business profiles have such hit and miss content right next to otherwise solid reviews.

The Imperial’s furniture and fixture choices not only encourages you to lift your game. It makes taking a decent, intriguing photo easy.

The branding is also super subtle and easy to incorporate.

The venues name is displayed at a height and placement that lends itself to photos. From the historic signs at the roadside entrance to the peeking ocean at the carpark door, there are plenty of places to have a great photo on social media and include the name. 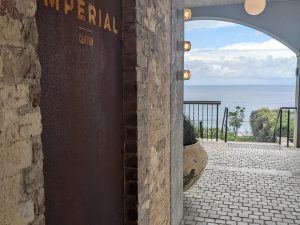 You won’t be asking “where is that?” when customers stand proudly at the Imperial’s doors!

The hotel’s history is embraced

The Imperial Hotel has been at Clifton since the 1880s. There have been a few versions in that time. Accepting all the history of the venue seemed like a big ask. Especially after it was vacant for so long. The team did a masterful job of not only respecting the history but also making it a part of the experience.

The hotel’s social media includes timelapse footage of the rebuild. It is played on TV screens in the front bar for patrons and is mesmerising. 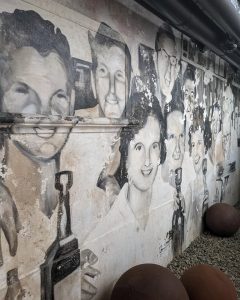 And one favourite feature is the light projection clock in the entry to the bathrooms that showed history’s passage through time for the versions of the hotel. It was a great short video for social media (that I forgot to record!).

Even though the hotel was essentially gutted and rebuilt, there were tell-tale moments throughout every level of the hotel. Yester-years now unsafe staircase gained new life encased in glass as a history display. 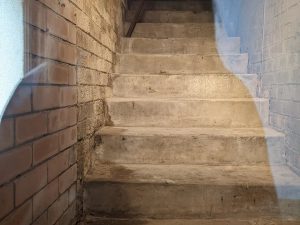 The act of saving old doors and antiques and scattering them with photos throughout the bar and calling it a “self-guided history tour” is incredibly very clever. It gives patrons a reason to extend their stay beyond a drink.

And a great way to get people talking. Especially on social media.

In the last decade especially, suburbs with water views in Wollongong have grown in popularity. Maybe it’s because Sydney house prices are too high. Or maybe it’s also locals waking up to the natural beauty. But more and more venues are designing to capture the beaches and lake and mountains as their star feature.

And the Imperial Hotel at Clifton is a masterclass is making that happen.

If you are after an ocean view, The Imperial does not disappoint. There are glimpses throughout many floors. There is easy access to a gorgeous yet understated garden that overlooks the ocean out the back. It invites you for a looksee but also says, “more awaits you inside”, which makes it easier to manage from a hospitality perspective.

You park your car over the ocean. And the main dining level has a wall of ocean and sky through a massive series of windows.

The garden is absolutely lovely, too. Simple yet interesting it lures you to view it before offering the majestic look at what is inside. 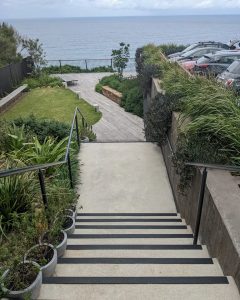 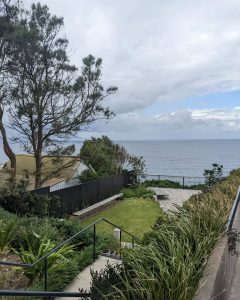 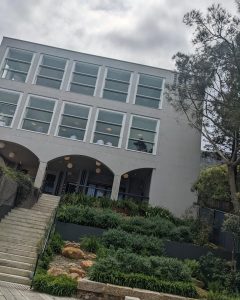 Even if you are not sitting on the main dining level, you can still love the sea view. There are ample places with good standing room and a decent view to get your photograph next to. This includes stairs and many of the tables closest to them. It makes collecting usable hotel social media a breeze because the design and the customer do the work for you.

Convenience is also a massive plus

Ordering from the table via a QR code on your phone makes both covid safe protocols.  It also reduces how many people are yelling on social media about how unfair the bar is or how long it takes. Instead of fighting for attention and spending the time at the hotel in cues, customers are at the table enjoying themselves.

All in all, you feel as though you can enjoy the venue, photograph it and share it. All without having to be elbow-to-elbow with other patrons or intruding on what other people are attempting to do.

And the great thing is that while these flourishes existed, at no time did they seem tacky or distract from the enjoyment of guests.

So many small businesses struggle with social media. While hospitality marketing is usually pretty good, hotel social media for the larger premises especially can be pretty lacklustre. Often because they treat it as the last part of the puzzle. It’s the last thing on the list and it shows.

Yet choosing to put the marketing in the hands of the customers right from the start is incredibly savvy. And looking at the choices made by the Imperial team, there is flexibility within the options.

You might not have budget to buy fancy marble tables that make a great flat lay. But you can use projectors and well-placed photographs to create atmosphere.

Your venue might not enjoy a sea view atop a massive cliff. But we can all use plants and lighting to maximise natural beauty to make the environment feel welcoming and expansive.

You might not remember to video the renovations. But anyone can put up time lapses of behind-the-scenes content.

History from the 1880s to present day might not be something you can claim, either. But we all have a story to tell about the businesses we’ve built with love and the spark of a great idea in mind we can share.

And we can all think of visually appealing ways to entice our customers to use social media to create something worth talking about.

Want a hand looking for ways to create delight in your customers via your social media? GET IN CONTACT NOW.