Learn about social media for a good cause

One of the best ways to learn about social media is to watch it in action. The trouble is, a lot of that action is negative.

Social media attracts a wide variety of reactions from people and not always good ones. Take for example www.lamebook.com which has enjoyed highlighting some of the sillier things people will share on their www.facebook.com profile. They are now being sued by the social media giant for trademark infringement  by the very same platform well known for sharing their users content with third parties through settings changes, software updates and applications.

That’s a costly way to learn about social media in anyone’s book.

Or domestic violence associations and support groups for stalkers, children’s advocates and countless others who bemoan the information not even a determined person can extrapolate through location based applications. Or www.foursquare.com, which give details of when and where a person “checks in” to an establishment, often without consent from all the people “checked in”.

Or the simple fact the disinhibition people find when using the internet allows them to troll others. These people air grievances, political and philosophical views, slander, vilification, hatred and even threats without the apparent good sense to consider what they are sharing with the ‘friends’, let alone the rest of humanity.

It’s enough to make you think twice about social media.

But there’s something that we need to learn about social media. And that is, social media is simply a tool. A tool we humans have the ability to use which reflects our influence upon it. And the best demonstration of how people influence the tool of social media for the better can be found in the Queensland Flood Disaster.

Making sure my friends in Queensland were safe during the Queensland floods was easy through Facebook. There were updates about rain, being stranded at airports, walking through flood water to get to higher ground, parents trying to gain updates on children and photos of sandbagged properties and flowing water. Through social media, we could offer help, kind words and even inject a bit of levity whilst receiving regular updates on the situation. 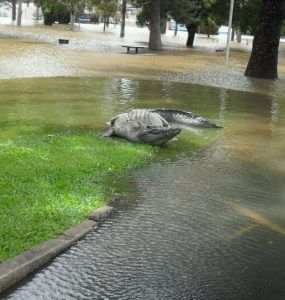 A Brisbane friend decided to upload a photo of the croc apparently viewable form his window at the local park that he shot for his wife’s new handbag.

This is of course a hoax, but certainly gave some concerned friends and a holed up pair in one of the flooded suburbs a reason to laugh and joke via social media.

One of the messages to lean about social media is it’s full of jokes, silly information and a bit of fun at your expense as well!

When it came to raising money to help people north of the border, social media was extremely effective.

Mobilisation began shortly thereafter. Lead singer of Sydney based band The Iron Bar Hotel put a call out to other musicians, volunteers and venues about starting a music based fundraiser and found an overwhelming response within hours.

Then came Twitter and Facebook updates plugging the Premier’s Appeal, the RSPCA call out for billeting for affected animals and donations. Countless events for donations of items, trivia nights and groups bringing people together to mobilise manpower, cash and moral support sprouted up in groups and social media feeds with thousands of supporters in record times.

Then came the business contributions. Discount site Cudo emailed and Facebooked members and ran a donation promotion, promising to match any donation to the Queensland Flood Appeal over $5 with $5 of their own, raising a reported 100K by the close of business the same day. Storage King put the word out through radio, online and social media about free storage for anyone in the flood paths and made sure trucks and trailers were at the ready to pick any takers and their belongings up.

But one thing you do have to learn about social media is keeping it tasteful always wins during a crisis.

Conversely to the great responses, Bing Lee offered donations for Likes on their fan pages which lead to consumer backlash and bad PR, and it remains to be seen how a similar campaign buy fashion retailer Cue using social media to promote a Sunday sale of 10% donated off every purchase goes. But being able to share any of these events with people via social media and have the message spread with such speed and ease undoubtedly helped garner much needed cash that may not of been given and physical support to people during a time in need. Social media became something which brought out a hell of a lot of good in a heck of a lot of people.

Learn the power of social media by doing

As anyone who owns a Facebook or Twitter account this week can attest, we’ve been able to share and rally people in crisis in a way that would not have been possible if social media wasn’t around. We’ve donated, commented, liked and shared to help other people. Fears have been allayed, stress has been relieved and people have found like-minded groups where they can channel their charitable side. It’s been truly amazing to behold.

From a marketing point of view this highlights how powerful social media and the internet can be, and how much change it can effect in a very short period of time. Through aspiring to greater things and inspiring people to follow suit, social media can be used as more than just a place to share daily trivialities, scripted quips or “just because” marketing, it can motivate, create and sustain passion and loyalty.

All that’s needed is the right message for the right audience, and the people will do the rest.

Want to learn social media for reals? I offer tailored workshops, mentoring and direct social media support. Get in touch to discuss your needs today.