Why can’t we have honest conversations about suicide?

Conversations about suicide may frighten us, but they are incredibly important. Yesterday the world lost Chris Cornell to an apparent suicide. I was of the era where grunge was at its height and Soundgarden was a defining band for me during university. I feel the loss of the man and the music keenly, as I think most of Generation X will.

To hear the news that it may be a possible suicide is confronting and painful. As someone that has lost friends to suicide, it’s difficult news to hear. But I’ve decided to channel that discomfort and sadness towards opening up the opportunity for some education and honest conversation about suicide.

The language we use is important

Like any serious subject, the language we use when discussing suicide matters. There is no right or wrong way to share if you are feeling suicidal. Open that door. Say those words. You are not alone.

How we see it reported in the media and also discuss it as an event matters greatly.

In Chris Cornell’s case, responsible reporters are using “apparent suicide”. This is language that demonstrates that what has occurred looks at the surface like a suicide but that medical investigators will be called on to determine the accurate cause of death.

What this tells us is there is still the medical examination and police investigation to finalise before it is labelled a suicide.

Why can’t we jump straight to suicide as a cause of death without a full investigation? First of all, sometimes a death cannot be ruled a suicide under the law unless it is investigated and a cause of death identified. Other times, it might be a case of determining whether the death was intentional on the part of the deceased or an accidental occurrence.

It means that responsible reporting and discussion means that until the medical examiners have done their job, we should use the phrase “apparent suicide” when having conversations about suicide.

Anything else until confirmation is received is unhelpful for family and friends alike. 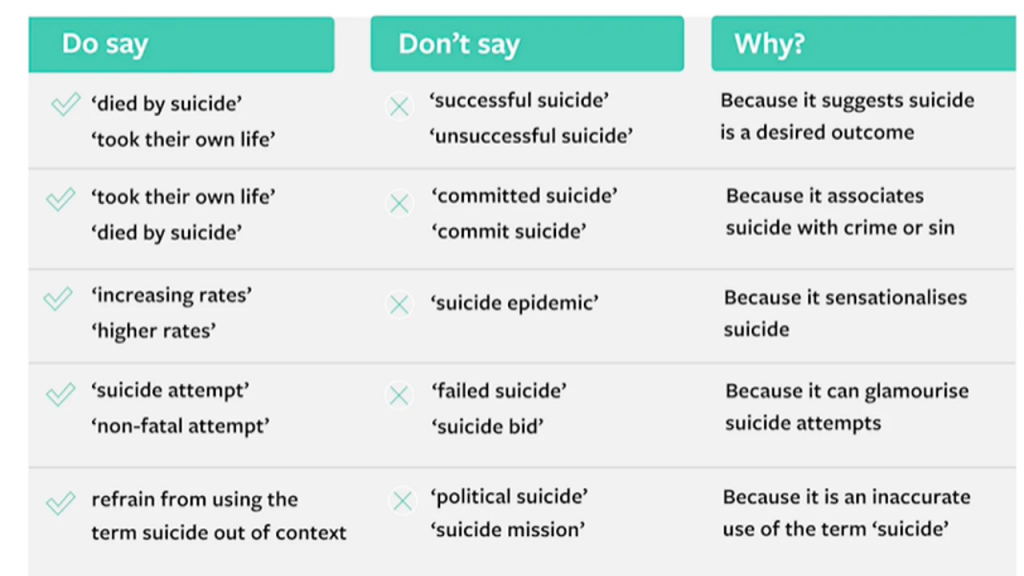 Another reason why language matters

When talking about suicide, please refrain from using the word commit. Committing suicide is a negative and loaded term. If you are faced with someone that is in the throes of suicidality, commit can be a trigger to go ahead with that suicide.

Commit implies that the decision is made and the outcome is a foregone conclusion. What you need to do when dealing with a suicidal person is look for turning points in what they say to move them away from that final decision. You want them to have doubts about suicide, not commitment to the act.

Better phrases come in the shape of:
“Are you having thoughts of suicide?”

“Are you saying you want to kill yourself?”

“Are you feeling suicidal?”

During conversations about suicide, you want clarity. Use open questions and don’t use euphemisms. You have to establish how they feel and how imminent a risk they pose to their own safety.

The language someone shares with you can also be a clue, even if suicidal thoughts are denied.

For example, when someone talks about having no way out, nothing changing, unable to face the pain anymore, not being able to do this anymore, these are invitations to explore suicidal feelings.

You don’t have to be a counsellor or a doctor to be able to talk to someone that is having thoughts of suicide.

NOTE: If you are facing an imminent risk of suicide where someone has confirmed they are suicidal, has the means to do it at hand (e.g. drugs or medication, standing on a bridge, holding a weapon etc) and won’t agree to move away from the means of suicide and/or to a plan to protect their safety, call 000. If you are uncertain if the suicide risk is imminent, call Lifeline on 13 11 14 for support or encourage the person facing suicidal thoughts to do so. It is better to get assistance and face a miffed friend than to risk their life on the notion the feelings may go away.

We have to reduce the stigma

One of the reasons why I started training with Lifeline and volunteering with Beyond Blue is I want a suicide free Australia that respects mental health conditions. I believe the stigma surrounding suicide and mental health issues is creating a culture that will perpetuate the suffering for millions of Australians.

We have to have open dialogue about what it means to be suicidal. And we also need to have a discussion about mental health and the issues we have in this country related to treatment.

Conversations about suicide should not be limited to when we’re concerned someone will take their life. Why? Because there’s so much information and stigma to wade through.

Part of that stigma is the assumption you have to be mentally ill to take your own life. This is incorrect.

What is found common in suicide is the existence of loss. It is the desire to end the level of persistent and pervasive pain. It is exhaustion of resilience in its purest of forms through a vacuum created by loss.

Loss has a profound influence on humans and it can take a variety of forms. Loss of identity, financial security, children, health, home, job and more can have an impact. Loss of sobriety, the end of a relationship, the death of a loved one and suicides within our social spheres can all place us at risk. Just about any loss that you can think of can be a reason for suicide.

Losing a couple of things at the same time can be too much to bear.

It’s important to realise that mental health is not the risk factor we should be looking for. It is that profound sense of loss. Your newly redundant or divorced friend that has lost their financial security, sense of identity as parent or breadwinner that is isolated from friends or family is at risk without being mentally unhealthy.

This is not to say everyone that experiences loss is suicidal either. But it does place them at risk.

As prevention against suicide, if you have faced a major loss please seek counselling. My own collapse came in 2005 due to redundancy and the end of an emotionally abusive relationship and months of being stalked left me bereft of identity. I thought because things were over, I was OK. I didn’t take the free counselling available to me as part of the redundancy because I thought I was OK. Little did I realise that I was about to go right down before I could come back up.

It was only until I began counselling that I was able to pull myself away from the hopelessness of loss and begin anew.

Respecting those left behind

Whatever we want to make of a situation such as a celebrity’s apparent suicide or how we feel about suicide in general terms pales in comparison to the needs of the people left behind. While we may want to make sense of the situation and resort to the very human thing of trying to find a neat ending, we’re often clumsy and unhelpful in doing so.

The loss that suicide brings with it places people nearest the person at risk of their own feelings of suicide. Suicides in your family and your social circle can place you in a higher risk category of suicide through that sense of loss we feel. It’s compounded by guilt and what ifs and sadness at not being able to fix the situation.

We must tread gently. Using empathy when having conversations about suicide is paramount.

Speculation in the media and via social media is dreadfully unhelpful. While we dig through a person’s past to work what might be the trigger, we don’t know for certain. We are the viewers on the outside. In Chris Cornell’s case, much is already being made of his lifelong struggle with addiction. Whether or not this created the conditions for his apparent suicide is neither here nor there.

Not when you consider he was also a beloved husband and father to two children. Not when you remember he is someone’s child, friend and band mate. Not when you can see that people have lost someone dear to them and no amount of mental gymnastics or internet examination can do anything about it.

Whether it’s Chris Cornell or Robin Williams or someone on your street, at your workplace or outer circle, your desire to make sense of someone else’s pain should never trump the needs of those struggling with the loss of a loved one.

We can grieve, we can remember and we can share. But we cannot place more pressure on people in a state of loss and grief. It’s unkind and unhelpful. We owe it to people to come to terms with a suicide the way they need as a primary focus.

Suicide is a minefield of stigma, of cultural and religious rejectionism, and unfathomable pain. When you lose someone you care about to suicide, a crack appears within that never closes. The deep sense of failing another person when they were in unimaginable pain is indescribable.

The last thing you need in that hollow and inky miasma is thousands of echoing voices about how the event was selfish, the person bad, and the people around them, failures.

This is a time for respect and tenderness, not shouting to have our theories heard.

What can we do about suicide?

If we don’t want suicide to be a feature of our culture and our society, we have to be open about its existence. We have to understand that people in pain and suffering loss require patience and support.

Shutting the door on people and their problems contributes to the isolation they feel.  There are 1000s of small and large things we can do to create a suicide free Australia and the first step to that comes from understanding the act and the thoughts leading to it better.

We have to have conversations about suicide or mental health or stress. We shouldn’t be afraid of what suicide is to the point where people having suicidal thoughts won’t reach out to us. We need to understand when someone is in crisis and support them.

Talking about suicide with empathy helps prevent suicide because it opens the door to positive dialogue instead of leaving a person alone, in the dark and in pain.

CONVERSATIONS ABOUT SUICIDE MATTER IN THE WORKPLACE, TOO

Workplace mental health issues and issues related to suicide are a real concern in Australian workplaces. Make it a priority to know how to ask someone if they have thoughts of suicide and how to refer them to appropriate support.

If you want to work on introducing having these conversations in your workplace, consider hiring me for planning and strategy or workplace culture work to help you out.

Conversations about suicide lead to a safer world

The more we’re able to talk openly about suicide and mental health, the more we will be able to do to reduce the stigma and their impact on the community.

If you are having thoughts of suicide, please contact Lifeline on 13 11 14.