What we could all learn from Radiohead

Last night with tens of thousands of other people I was brutally assaulted, seduced and made to feel like I was privy to something huge yet private all at once. The circumstances of this bizarre yet thought provoking situation was seeing Radiohead at the Sydney Entertainment Centre.

Here’s the disclaimer: I am a card carrying Radiohead fan. I’ve often joked I could say my life is complete once I finally get to kiss Thom Yorke’s bung eyelid. I am one of those murderous monkey’s who persists on singing ‘Creep’ at karaoke- because I can. I have the albums, the film clip DVDs. I can mouth almost every word to every song.

But what enthralled me and thousands of other people last night was not devotion to fandom or knowing as much as I do about them.

It’s because I know so much of them on a musical level and yet they still managed to surprise me. 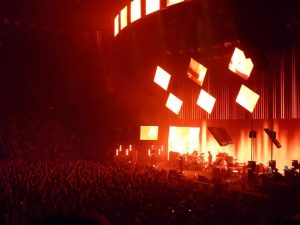 I spend a lot of time choosing the ‘right’ words for clients. Reading the books that everyone else is getting something from. Road-mapping, demonstrating and breaking things down. And all of that stuff works. But it takes a moment like last night to really explain why things are popular and why they work.

It’s because they delight, they puzzle you and they get you thinking, pondering and wondering long after the interaction has happened.

They don’t really give a damn about playing the songs of the latest album or the albums since their last tour. They don’t play the same songs each night they are in any given place. They don’t play the piano songs and then bump it out not to be seen again to cut down change over. There is no single encore, there are 3 or 4. There isn’t any fireside chat about Yorke’s social responsibility causes ala Bono from U2.

Instead they plan day to day, play what they want, have roadies working like some kind of weird hybrid of removalist and ballerina throughout the gig to pop gear off and on the stage, and a ‘Free Tibet’ banner is draped unassumingly across a keyboard stand and a discreet information stand is in the foyer.

This is all whilst most of the band plays in their own little world and a barefoot Thom Yorke bounces around the stage looking like a savage cross between a hyperactive Joey, hip-hop artist and that dude at the pub who’s just a little wrong but there’s something you can’t just help being drawn to.

Radiohead radiate something that is not as vulgar as cocky but not as polite as unassuming. They know you like them and they play on it, but not in such a way as to offend or alienate.

And Yorke freely admitted “you’ll get used to us” when referring to the band’s contrary ways.

It’s a big production and it feels so seamless you just know they’ve had to marinate in every inch of what they had planned right from the get go. And yet it still feels surprising and shambolic. It doesn’t feel rehearsed, it feel delicate and tough at the very same time.

Things could break at any minute and yet you forget all that.

Instead, you are rewarded for having faith in them to deliver.

Twitter was a-flame with adults of all ages gushing like school girls. Sure, there was a couple of sooks in the corner mocking them for playing ‘obscure’ songs and choosing the ‘wrong’ albums to play from but they were so very easy to dismiss with a single eye-roll as someone who just didn’t get it.

What did I take from this?

…Because at the end of the day, the only person who really needs to feel happy about what is achieved is you.

That’s what we all need to learn from Radiohead.