Communication lessons from The Toys that Made Us

I’m a massive sucker for a good business documentary, especially ones with communication lessons within. I know, nerdy, right?

Anyway, Netflix has been great for that. The Toys That Made Us documentary series is a classic example of this in action. It’s also a great mix of the toys that Generation X has grown up with.

Here is what I uncovered communication lessons wise from the Toys that Made Us.

Always communicate what you want

Star Wars creator George Lucas was famously declined by a multitude of toy manufacturers before teaming up with the eventual company, Kenner Toys. Films historically had kind of sucked at merchandise and so a lot of companies simply weren’t interested. 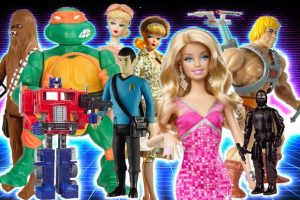 By the time Lucas found one that was, he famously negotiated a deal that made Kenner Toys exceedingly rich. Lucas however didn’t see those funds for himself.

He accepted that no one wanted to market his toys, so he didn’t protect their success.

The communication lessons from Lucas’ situation:

By the time the Star Wars and Kenner Toy deal was struck, production was way behind the movie. The movie had gone on to be a success and kids (and likely adults) were hungry for merchandise. There wasn’t much in the way of toys to put out there yet, so Kenner Toys decided to reflect that.

This is massive because it kept sales steady at a time when interest was high. Kids can be notoriously fickle, so capturing that interest at the time was paramount. Plus, it also gave Star Wars several accidental waves of interest as the film petered out, then the toys arrived and rejuvenated interest all over again.

In marketing and business, people can get a little hung up on thinking everything has to be perfect. The reality is, we have the ability to think around corners. We don’t need perfect to be satisfied.

Throughout the Toys that Made Us documentary, there were examples of that.

Battle Cat is out of proportion with He-Man. Star Wars and Star Trek figures are not correct to the show characters or the weapons or other accessories, yet they still sell.

The interesting thing is we expect Comic Book Guy style critique of everything we do. And so, we think we have to have perfection on display. Yet even Comic Book Guy isn’t entirely on board with this need for perfection. You only need to see how the incorrect and inappropriate collectibles are valued. Or if you have a book with a massive misprint or film with a deleted scene.

What we do with story is find new ways to carry it. We know our imaginations are powerful and that they can fill in major gaps.

This is why we can have websites that are ugly, missing parts of the puzzle and all sorts of plot holes in a Tarantino film yet people still raving about them.

We focus on the story and create a place for ourselves within it.

Your product will not be for everyone and it will likely be rejected. Barbie and the Star Wars toys are classic examples of that.

Both highly successful toy franchises were rejected time and time again. No one thought the ideas were valuable. But they persisted. That persistence eventually paid off.

If you tie yourself up in knots and aren’t willing to try for fear of rejection, you won’t get very far.

Therefore, your communication lessons have to be:

One of the reasons why so many of these stories worked and went on to be great toys is because they respected and paid homage to stories we’re already familiar with.

Star Wars and Star Trek are both westerns set in space. They include the usual features of reluctant heroes, star crossed lovers and philosophies of learning about yourself through others.

He-Man was an ode to fables and allegorical tales with a dose of mythology thrown in.

Film makers often play on characters and stories we already know because that familiarity makes them easy to understand. In business, you can see this in action in the start-up scene. The use of “We’re the Uber of pets” or analogies like that are that adventure on a small scale.

You can also see the opportunity to expand by connection that seems logical. It’s logical to have a TV show, expand to a movie and then give the action figures to play with. It can also work in reverse, like with Barbie.

Barbie and Star Trek (and Star Wars to a lesser extent) have also made travelling through time part of their appeal as well. They’ve stayed relevant by mirroring the challenges of the culture in which they dwell. Your business has the same sorts of life-cycle challenges through early adopters through to laggards. Or as the relationship with your product grows.

Have you watched The Toys That Made Us on Netflix yet? What did you think?