First rule of being creative: No excuses, no, none 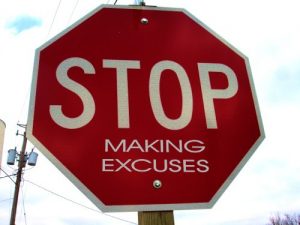 Creative marketing is a difficult concept for some to get their head around. It seems like marketing and the creative process are at odds with each other.

But nothing could be further from the truth. In fact, marketing can often be the first evidence that you are indeed a creative practitioner.

There’s a big fat difference between wanting to be creative and being creative. The difference always comes down to your attitude.

It’s really easy to make things overly complicated so you don’t have the chance to succeed.

In my time, I have heard from band members who wouldn’t set up a MySpace because the lead singer wanted to “consult with a MySpace employee first”.

I worked with a film maker who spend so much time on researching a project and carrying on with self indulgent fantasies they only have journals of plans and no films to show for it.

And I’ve gotten in my own way on more than a few occasions by trying to inspire people to work on creative projects who are clearly more interested in beer, TV or colour coding their sock draw.

So why do we get in our own way when we create and what can we do about stopping it?

Here are a few things I hope will help you avoid falling down into a creative marketing back-hole.

As any good ninja will tell you, understanding your enemy is one of the most powerful ways to overcome them. So what is it about your endeavours that constantly stop you from doing a project or getting your stuff out there? Are you constantly choosing the hard road and putting up obstacles to why you cannot move forward like MySpace Girl?

Well, maybe, just maybe, you need to ask yourself if you are simply procrastinating! If you are, why?

Are you really that enthusiastic about the project or is it the dream or ideal associated with it that is the driving force for your ambition? Are these real setbacks that need negotiating or are you putting them in your way to avoid work or failure?

Look at why you spend ‘spare time’ doing something other than investing time in your creative works and ask yourself why that is… and don’t take “I’m tired”, “I have no money” or “my flatmate is a douche” for an answer.

You can change all of those problems or at least work around them… that’s if you really want to.

Creative marketing isn’t about having pages of documentation. But it is about knowing where you are going with both the project and how you plan to spread the word about it.

Having a road map or a plan for a creative project sounds counter intuitive but it isn’t. It is about providing a backbone for your project that you can follow when things get tricky or to help you push through when your motivation ebbs and flows.

Making sure your road map is clear as opposed to resembling a plate of spaghetti is equally important.

Over planning and tangling yourself up in minute detail is not planning- it’s needlessly creating blocks in the road. Write down all the things you want to achieve and then break them down into milestones to follow.

Bear in mind it is a map and just like any map, you can change direction, but unless you are Doctor Who, you won’t be able to teleport to distant destinations in the blink of an eye.

Keep it simple so you can follow your path. Don’t be like the film maker who wanted to make work about the Wright brothers who spent months making homemade Frisbees to understand flight who has no film to show for it.

Don’t involve people who don’t want to be involved

With any project you work on or creative marketing campaign, you need to get appropriate buy-in from the people you involve. Otherwise you invite failure.

If someone seems like they are dragging their feet, they don’t want to commit time or energy to your project, or they don’t ask about how things are going you need to face reality and realise they don’t care.

You will in your lifetime meet amazingly creative people who you’d love to work with that don’t reciprocate the feeling. This can come from anything from not seeing you as the right fit to their own personal issues such as laziness, fear or ego.

Be honest, encourage and be open to working with people, but don’t pursue someone who just isn’t into what you want to do.

It will only cost you time, money and get in the way of what you are trying to do. If you ask them directly if they want to help, don’t take any ‘yes’ that is an elongated word that ends on a high pitch. They are thinking they’d rather watch the Sarah Conner Chronicles for the 30th time and whether Coopers is on special at the Bottle-oh, trust me.

Allow yourself to tell people to Fuck Off

Yes, that is brutal for a reason- it’s because there will be some people out there who think what you do, your skills and your creative dreams are not good enough to be pursued.

They will try and put down what you do for a variety of reasons but if you believe in what you are doing, who really cares what your family, friends, partner, work mates or the guy who mows your lawn think?

Let me put it this way-

If Heather Graham (Boogie Nights, Scrubs, Austin Powers) had listened to her parents she wouldn’t be an actor.

If Radiohead listened to their agent and record company they would not have done the album ‘OK Computer’.

If women had not broken the ‘no women allowed’ taboo’s we wouldn’t have had the work of the Bronte sisters (who wrote as the Bell brothers) or Mary Ann Evans as George Eliot.

If they don’t like what you do but you do, tell them to Fuck Off. Seriously.

Ok, so you might want to make a huge feature film but if you only have 5K, don’t know a famous actor and are only part of the way through the writing of a script, stop imagining yourself at the Golden Globes and look at what you have got.

Sometimes you need to start smaller than you want to get to where you want to be- just ask Peter Jackson, Kylie Minogue or countless of other people who cut their teeth on much, much smaller projects than the one’s they had in their sights.

Like any career, being creative takes time. Creative careers take effort, learning, mistakes and practice. So work towards your goals instead of banking on the one big thing and you will find you get further with it.

Not everyone is a winner

There is no creative artist in the history of creativity who has struck gold with every single thing they did. Not with marketing campaigns, projects, whatever. Sometimes the ratio of what is good enough to show to the public is lower than you would like, but so what?

Treat it like an athlete treats training- the more you do, the better you will get. Know when to let go of a project when it clearly isn’t working for you is important too. Just because you have laboured on something and it doesn’t come to fruition, don’t count that as a loss… And don’t be afraid of making mistakes, failing or not being at the top of the class.

Critically examine what you did, identify areas of improvement, learn from it and move on. Set yourself reasonable goals, work hard and laugh if you fall on your arse and pick yourself up again.

It’s much more fun for you and the people around you to listen to you if you are setting your creative ambitions at stretching level as opposed to “I need a rocket ship to get there- do they rent them at GoGet?” dizzying heights.

Finally, please delete the following phrases from your vocabulary…

I don’t have enough money…

I don’t have the right tools…

Aww, so and so beat me to it/stole my idea…

If this doesn’t work, I am giving up <insert pursuit>…

The industry is too hard…

If you want help with creative marketing or creative ways to market what you are doing, get in touch! I can help as a marketing coach and/or with your project.