5 ways your project feedback is useless

Good quality project feedback is the cornerstone of any business adventure. Yet so many people tend to confuse criticism for useful project feedback. Or they even let their emotions rule the process. Project feedback is not a time to grab a soapbox, be heard and have at it. It’s a time to ensure you are communicating something useful with another person.

As a communications specialist, community manager and freelancer, I spend a lot of time receiving solicited and unsolicited project feedback. It’s not whether it has been requested or not that defines the value. It’s the quality of the project feedback given. 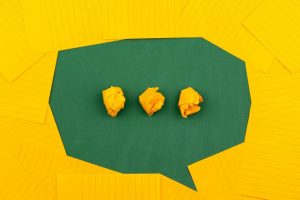 Photo by Volodymyr Hryshchenko on Unsplash

Sometimes, you will be stressed, under pressure, frustrated, upset and in a negative frame of mind. Show me a businessperson who doesn’t at times feel under pressure and I will show you a rare beast indeed.

However, if you allow your emotions to run over the top of the project feedback you are giving, it limits your ability to be taken seriously.

The person is not the problem. The problem is the problem. Yet when we give emotionally laden project feedback, we are often confusing the two.

Emotions are also our responsibility. If we allow emotions to take control of the situation, then we create conflict. Nobody wants a saddleback of someone else’s unhappiness. And to deliver it only serves to create friction.

If you are in an emotional state and need to give project feedback:

You spray the message

Spraying a message sounds a lot like spitting on people when you talk or a de-sexed cat going to town on a room for a reason. It means you’re indiscriminately sharing opinions, information and feelings with everyone else prior to or instead of with the person it involves.

It’s one thing to ask for counsel from a friend or cooling your jets before having a discussion with someone about a difficult situation. It’s something else entirely to talk to everyone else instead of the person who can change things.

I hate to say this, but women are often prone to this kind of behaviour. It’s about garnering sympathy, getting attention and feeling validated when we’re upset. And it’s focused on the individual who feels slighted being soothed by safety in numbers.

It is not useful. The person you have a problem with is the person you should be speaking to. Because they alone can work on a remedy with you. At a certain point, asking other people to hear your story or feel your pain becomes an exercise in bolstering the choice to be miserable. Or to be righteously upset.

But there’s no respect there. Not for yourself as you fish for validation- or for the person who has allegedly done you wrong. It becomes gossip, or a way to reinvest in frustration. Mostly, it lacks accountability, it doesn’t invite reflection and it doesn’t give another human being the opportunity to talk things through.

If you find yourself talking to everyone else instead of the person you have the issue with, stop.

Break the with oversharing and return to project feedback by:

It lacks a solution

Identifying a problem is an important part of moving forward. Communicating the issues can help growth, move things along and create better situations. But if your project feedback is always based on identifying what is wrong with something without the potential for learning and growth, it can lack value. Adopting a solution-orientated approach can help avoid this.

There are a lot of project feedback models that talk about adding compliments, identifying parts of the project or situation that are going well and so on. This can be valuable but also confuse the situation. However, if you look to identify problems and then start pondering the possible solutions, it can help you understand where a person is coming from.

It’s designed to hurt someone

We live in what Hugh Mackay refers to as a “culture of rampant individualism”. We pride ourselves on sassy one liners, cynicism and mic drops. But at what price?

It might look justified if you’ve spent a lot of time in your head amping up your sarcasm and playing witty one liner games to drop one on a person, but that person isn’t privy to the hours (days? Weeks?) of mental games you’ve been playing. They do not know the backstory.

In essence, dropping the mic on someone, especially with an intention to lay them flat, is like delivering a punchline without a joke. Without the context or the build-up, the person on the receiving end is probably only going to feel hurt, humiliated, isolated and unappreciated.

What is actually cool about making another person feel like that?

Being cruel because you are frustrated or because you have decided it’s high time someone learn their place or get woke or whatever snappy way you want to put it doesn’t give you credibility. It makes you look childish and mean.

There are no prizes for chasing a feeling of superiority based on grinding another person into the ground. It doesn’t make you seem like a leader, a person of power or in any way better able to navigate the world.

Instead of giving project feedback that hurts, get control of yourself. I can’t sugar coat this. If you are wilfully looking to hurt or humiliate someone else, nothing justifies that.

There’s a time and a place for giving project feedback. Online in front of a crowd of people, in front of a bunch of people who can overhear or in an incredibly public manner isn’t it. Given that there are emails, phones, instant messaging and the ability to ask to speak to someone privately, making a big scene is less about project feedback and more about getting attention.

The boss that dresses the worker down in the office, the customer who decides now is the time to air their grievances online, the person who carbon copies everyone on the email, they are all attempting to use a technique to represent the crowd by proxy and asset their project feedback as a voice for the group.

Otherwise, they’d be looking at ways to make it constructive instead of uncomfortable.

How you deliver project feedback and who is present has a bearing on what is said. Project feedback and criticism can be sensitive topics. And again, treating these moments with respect does more to take the pressure off. And that’s what you want.

When a person feels like they have had a spotlight thrown on them, they feel more pressure than is usual. It also means that anything negative or that has the potential to be taken in a negative way will likely end up being perceived that way.

Making a scene in front of people, even if you think it is justified, timely, appropriate or supported by the group, immediately does two things:

Brene Brown talks about leakage in that if you gossip or act untoward towards one person to another, the person you are sharing that moment with will also feel that vulnerability you intend for another.

If you are tempted to use project feedback as an attention mechanism:

Project feedback is not a weapon

Project feedback works at it most efficient when we use it to support people and the processes we’re engaged in. It is about learning, growing and maximising efficiency. Removing the drama creates far more opportunity for something positive to arise.

Want help with learning the art of project feedback? Get in touch now.