Born standing up: Be inventive and creative

It’s been a while since I’ve mashed out a good book review, but the time is ripe after reading comedian Steve Martin’s autobiography, ‘Born Standing Up’. It probably starts better than any other book I’ve read in a long while. A forward that is worth reading about how it’s more a biography than an autobiography because the guy he once was is no longer him. That’s a sensation most of us can relate to. Especially if we’ve worked in creative fields with character work as a mainstay. 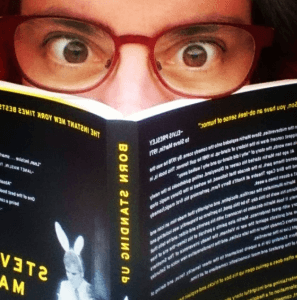 But the book is more than something for creatives or aspiring comedians or even fans of Steve Martin’s work. It stands alone as a wonderfully written life lesson wrapped tightly in one man’s experience.

I bloody loved it. It’s a testament to inventiveness, creativity and ability to assess the real limitations of person and what we project is so useful in the modern social media age. Or in business, life and creative process.

Necessity is the mother of invention

When Steve Martin first started out, he didn’t have enough material for his sets. He wasn’t going to let that stand in his way of being able to say yes to a gig though.

One of his hallmark bits of walking through the audience and later, leading the audience on whacky adventures, came from not having enough material. Improvisation was his backstop for his program.

In a world of business and creativity where we’re told to plan and plot so much, it’s refreshing to see this sort of thing in action. It’s not to say you should go blindly forward like a borderline sociopath with only enthusiasm and your own hubris as a guide. What it really means is know yourself and your capabilities well enough to be able to act. Be OK with the outcome if something happens you don’t expect.

As a writer and a business owner, I find this freeing. After spending a lot of time in my head trying to work out what is worthy of being put on the page, it’s nice to approach the situation from the perspective of 80% cooked and being brave enough to come up with the ending. It also means I don’t have to drown in strategy and certainty and can press forward with ideas and learn as I go.

The tension between what you end up doing and what you should be doing doesn’t have to be one of restriction. It should be a case of finding ways to free yourself, so the margins can be explored, and the magic can happen.

He claims he even scored gigs because he was in a union and not many other performers were. A venue needed a union act to stay active and voila- he was chosen.

The early troupes he worked in were not seasoned professionals and neither was he. But they all (including venue owners through to crew) were willing to play around and work out how things could happen.

The important lesson here is being in the game and be willing to learn and you might get somewhere you don’t expect.

Humility is attractive. So is self-awareness

I can remember vividly the moment where my endearment to Steve Martin grew. It was with this watertight quip:

“I was not naturally talented…but working around that minor detail made me inventive.”

How nice is it to see someone tuck the bullhorn of confidence away and deal with the realities of his situation? How nice is it still to have someone sending the message that creative spark and the ability to know oneself is the key to knowing what to do next?

And let’s give a small golf-clap of wonder at summing up the idea of working your butt off to hone craft so succinctly.

Born Standing Up was written over 10 years ago. In those ten years, somehow humans have decided that “show, don’t tell” is a myopic worldview. And that “she who sprays the internet loudest wins” should be printed with deft across every social media channel.

It’s laborious needing to step over the next person that wants to solve your business and creativity woes with the latest just add water plan.

In contrast, here is a man that achieved comedy greatness. He reduces his career to 10 years of learning, 4 years of good art and 4 years of probably playing the bit a tad too long. He basically quit comedy and a lot of people didn’t even know he had until the book came out. That’s if his interview with Jerry Seinfeld on “Comedians in Cars Getting Coffee” is to be believed.

The entire book is an exploration of Martin’s self-deprecating view on life. Yet it’s not the walk of a depressive or bitterness. It’s one of the most exquisite walks through that internal self-doubt and self-limitation we all feel. Imposter syndrome is real. His anxiety is a physical condition and permeates some of the corners of the story.

Yet not once is it a pity-fest or a moment to wonder if he got in his own way. More an exploration of one of the most insightful human beings on the planet that probably didn’t come to terms with their fame.

This makes me want to explore his work and him as a person so much more. I feel warmed by and endeared to a person much in the same way that I found the light and shade of Robin Williams so beautiful.

Again, as a writer and a business owner, business coach and marketer, I wonder if such a beautiful connection could be established with the work I do with my clients if the sales pedal is stepped off. So many internet famous people move from endearing, real-life tenderness into guilting, shaming and hyperbole. So many products cannot and will not admit faults, defects and humanity.

Yet we’re all broken, faulty, slightly crumbling at the edges and have moments of intense negative emotion. Why can’t these feelings be explored with grace as part of the story of a product’s being or a business’ reality? Instead of moving towards a world where it’s all consistent and shiny, why not plumb the depths a little more?

Being able to improvise and go with the flow comes from knowing your process. ‘Born Standing Up’ has his process scattered throughout the story. You can (if you so choose) take it as a comedian’s lesson guide. I will be investigating the scrawls I collected in a subsequent blog.

In the meantime, there are also some great lessons for anyone that is in business or hawks their creative arts to take on board:

The notion that everything is out-dated is wonderfully refreshing because it always means there is room for something new.

This is especially interesting in that wonderful world described before where everyone has the plan for you to follow.

I’ve long pondered how useful the plan can be because by the nature of things only working when they have a certain novel, stand out quality, exactly how can working from a tried and true formula meet that criteria?

Here, we end up back in invention. The more you’re at the front of the wave, the more likely you are to stand out.

Jokes are funnier in the mirror

What Martin says is “jokes are funnier when played on oneself”.

It reminds me of a line in Scrubs where Dr Cox can’t work out why Dr Kelso is angry at him for their conversation. Carla asks him what happened, and he relays that they were riffing about their kids. Only Dr Cox joked about his child and then so too did Dr Cox.

Beyond the parenting lesson of leaving the jokes out about other people’s parenting and offspring, the same is true of building brands and rapport.

It’s about what you can do for the client. Not how the client is a big fat failure at life and needs you. Companies that are humble and take their lumps on social media when they get it wrong cope better in the aftermath. Companies that find time to laugh at themselves do it with style.

No matter the occasion, by not taking yourself so seriously, you bridge the gap with us failing, faulty and incomplete human customers.

Laughter can be created in the absence of further information. So too can a relationship with a product or service survive without us planning out the mystery.

We want to feel like we discover creativity, jokes and businesses. Figuring things out for ourselves is a high part of human pride.

So why not deliver information, content, jokes and all the rest in a way that allows your audience to do that?

Like an audience member at a comedy show, we want to know where things are going. We want the plot to move forward. The relationship we have with a business is about expanding and building on that momentum.

So many businesses deliver on the first sale and forget the second. Or they think poking someone in the ribs for a renewal is good enough.

What about the times when the new kid arrives on the block? Or when the glamour of that annual poke has well and truly worn off?

Be there for your audience with content, advice, ideas, ways to expand their horizons and above all else, help them. Move your relationship, story and plot with your customer forward.

And be precise and engaged while you do it.

If I could be half the writer Steve Martin is, I’d be a bloody happy camper

The value in Born Standing Up isn’t only as a great story of a guy we all know (somebody that we used to know?). It’s not even something to be shoehorned into a business blog such as this.

There’s value in the book because it’s enchanting and intimate. Beyond the marketer racket, he’s got me seriously thinking about creative writing, scripts and comedy again.

So, thank you, Steve Martin for your book Born Standing Up. I’ll see you at the next blog where I murder your process or muse on you some more. Here’s hoping it isn’t too painful for you.

Liked me review of Born Standing Up? for more content, Check out my book review section now.