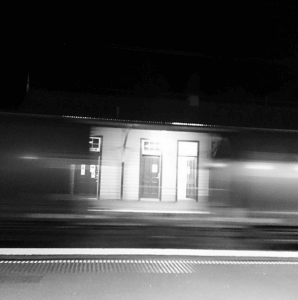 A late night shot of the train for Instagram. https://instagram.com/unashamedlycreative/

Marketing  on social media isn’t about being there for the sake of it. Social media marketing needs to better understand social media to be effective. Social media allows us to express a part of our identity. It also gives us a safe haven to showcase our interests.

But while all platforms have these abilities, the weight they give to the importance of these elements is different.

A lot of businesses and people confuse marketing through social media for broadcast. But as the name suggests, social media is more dynamic than the usual marketing fair.

For example, Twitter  is about establishing and maintaining a position of authority. It’s conversational and encourages expansion outside your interest area.

But it’s also a communication too. Where marketing and social media invite difficulties in the modern Twitter scenario is the assumption the conversation isn’t that important.

Where users fall down is they focus on it as a broadcast medium centred on a particular interest like business, marketing or politics. To maintain that position of authority, you need to balance the human elements and remain in conversation with others.

GooglePlus struggles because its attempt to stay neutral have made it difficult to pinpoint the exact reason for using it. It’s failed forced authorship that made identity mandatory. That didn’t work so it’s shuffling of the interest deck via communities.

By not knowing it’s own motivation for being, GooglePlus has damaged itself. It refuses to place a foot firmly in either camp. Instead, it’s hopping from one to the other, people aren’t that sure about bringing their fun.

People who are successful on GooglePlus have had to make their own decision and push forward. Not all social media users want to be so autonomous and direct about their social media future.

Facebook is about identity. It’s early beginnings saw it as the place to group up based on educational institution. Today’s Facebook thrives in groups based on parenting, business and politics. It encourages us to tell everything we do. Now it asks us to curate the videos we want.

It reminds us about friendships and milestones. It cheerfully puts forward other groups and interests we may like based on our already established identity. From status updates to comments, Facebook is targeted towards you standing up to shout “this is me!”

Instagram is about interest. Cars, fashion, cooking, watches, kids, pets, and travel fill these pages. It’s about defining yourself in an almost quietly introverted way based on the things that you love the most.

The identities that have made their splash onto the world’s stage via Instagram have done so creating compelling journey’s around their interests. They have become identities because like minded people have been attracted to their feeds and that journey.

You could argue that broadcasting storytelling marketing through social media channels happens best when it feels like it’s in the moment. It feels less staged. There’s more room for identity because it it’s meant to be a real time medium.

The two of course are interchangeable, but the signs are there. If you want to have an identity associated with business on Instagram, you need to show it as an interest as well.  People will accept your behind the scenes, mundane life stuff as a beautiful tribute to the behind the scenes on a business Instagram. They won’t be so accepting of business items that pop up among what used to be a place of story so readily.

When marketing on social media, it’s all about perspective

Marketing through social media makes. But you have to keep community in mind. You can’t simply replace a channel when it looks like another is failing. Jump onto Instagram because your Facebook is dying at your peril. They are two different beasts.

Besides, there are a couple of other things that warrant repeating with any social media adventure:

·         Likes and any form of repurposing are great for the ego, but it’s the clicks that count

·         Social media permeates so much of our life, it’s hard to see where it begins and ends. Liking something doesn’t equate to dollars.

·         Perfect isn’t as appealing as you think. With the rise of raw social media (e.g. Periscope and Meerkat etc) you can relive the thrill of early stages social media. To get up close and personal with brands and ideas before they get polished. All online communities find their appeal in frontier thinking and it’s the stamp we put on them that matters. Don’t overcook things because that’s when you’ll find your social media goose hits the oven

·         It’s called social media for a reason. Talk to people! Make an effort to be places other than your channels, don’t be afraid to like and follow others. Get in a couple of scraps, bolster a few egos, be nice when it matters and pack a sense of humour. Think about parties. Conservative, fearful and dry people bore us. Don’t be that person on social media. And don’t be the passive aggressive crazy person either unless you want to be watched only for your next big train wreck

·         Use tags and interests to guide you. Don’t be afraid to discover something new as the worst it can cost is an unclick if it doesn’t work out

I am not brilliant at Instagram. I’d prefer to capture moments from my life (and an insane amount of Labrador photos) then I would sell a product. I am studying the mechanics of Instagram selling for my small business and startup clients.

Now I begin the journey into using Instagram for my side project, Hacking Happiness.

So I’ll be testing the hypothesis Instagram isn’t Facebook for you to see. I’m in the trenches with you.

You can watch with interest (or for the train wreck) via HackingHappy. Hopefully, I get the marketing through social media balance right