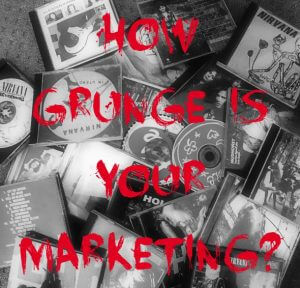 Comparing content marketing strategy to the likes of Nirvana and Pearl Jam?! Am I crazy? Some might say yes.

But there is a link. Hang with me for a moment.

Grunge was a movement that a lot of people don’t give enough credit to. That messy little era us Gen Xers love to look longing upon is in the rear mirror. Grunge was around when I was at uni. So it was perfectly timed. It shaped a lot of my early interest in writing and singing.

But what if I told you grunge also taught me how to be better at content marketing?

Developing a new sound by messing with the old

All music has a baseline (not a bass line, that’s different) you need to get right to make it effective.

You walk a fine line between what is recognisable. You know- the chords you strike, the notes you hit, the progressions and the time signatures.

All the things that give people the ability to attach, move and drift along to the song.

It gives you the ability to sing along to the chorus through repetition and sense when the bridge is coming.

This was all a part of grunge. And it’s a part of your content marketing strategy, too.

Content marketing has its own progressions and inclusions. Like the SEO and basic stuff like making sure you speak to your audience. It’s using language that is approachable and reasonable. It’s the story telling that you understand.

Or the business style guide underneath.

And the recognition that yes, this is business copy even if it’s telling me a story.

It’s going to solve your problem and that’s why you’re reading the content.

It’s also about breaking some of those rules.

Grunge was not rock, blues, punk or metal even though it drew much of its base from the same elements these movements do.  It took the same lessons it learned from those genres and it bent them and twisted them. It flew in the face of conventional music. It was raw and sounded crunchy and laden with emotion. The song writing was more about reaching into someone’s head.

It wasn’t “my wife just left me, oh well, pass the whisky” blues. It was “someone just ripped my damn guts out and it hurt”. Same, same but entirely different.

That’s why there’s a need for an effective content marketing strategy before you write. You need structure and SEO keywords- you need a plan! An audience, an idea of the problem you’re solving.

But then there is fun on top. It’s not straight business writing. In fact, some of the most popular bloggers are your English teacher’s worst nightmare.

But there needs to be an understanding of the old to crunch, play and run up and down the conventions to make the connection.

We believe in the characters in song writing that touch us in a certain way. We believe in content marketing because it carries the same structure wrapped in story we find so appealing.

A lot of people get blinded by SEO and fall right out of the tree. But think about the things you read- do you enjoy shopping lists or Neil Gaiman novels?

When you write content, you’re writing it for your audience. You’re explaining to them how to use your product. You’re asking them to investigate more of what you offer. You’re asking your potential audience to trust you.

But you need to identify who your audience are to write for them.

So you need to ask these sorts of questions:

Sound dry against a backdrop of Nirvana, Pearl Jam and other grunge greats? Consider this.

Grunge was about a sound of music together with flannies and fashion. It was geographically tied to Seattle. It messed with the idea of poverty, fighting the status quo and displacement. It didn’t just acknowledge it was sad sometimes, it screamed it was dark a lot.

You knew your particular favourites and where they sat in the scheme. And you’d still be able to recognise the sound of Alice in Chains, L7, Hole, Smashing Pumpkins, Pearl and Soundgarden.

This experience was established through the instantly recognisable figures together with an unmistakeable sound. It’s backed up by hallmarks in fashion and almost anti-marketing marketing.

Grunge would not have done as well as it did if the experience, though a different take, wasn’t so universal.

Grunge was another way to plumb the depths of being young using someone else’s words. To you, Soundgarden’s Black Hole Sun meant more to you then Kylie Minogue’s Confide in Me. Despite both arriving in the charts in 1994, one gave you so much more than a reason to wear an “I love Kylie” tee shirt.

And you felt connected to a scene by albums and music. It gave you a reason to wear Doc Martens, tear up your clothes, scream out lyrics and not feel so isolated. You finally felt understood because someone had given you a way to translate what you felt into music.

The music was theirs, but the angst belonged to the audience. And that’s why millions of people around the planet connected. They knew what they were getting from participating in the scene. But more than that, they got an identity from it. They finally got a label for the feelings they felt.

Grunge sold you a feeling wrapped in a look and records, film and concerts. It then sold participation to you through physical provision of that music. And the ability to see it live.

Social media wasn’t around to make it all happen. But there were early websites, paper zines and other forms of media to get the message across.

As consumers of the music, we did the hard yards to stay connected. We joined mailing lists and online newsgroups. Read Rolling Stone magazine, listened on the radio and made damn sure we got the inside news on tours and B-sides.

And grunge used controversy to get people talking even if they weren’t part of the scene.

Even if some of that controversy was completely accidental. Like Courtney Love’s famed interview with Vanity Fair.

Such as Cobain’s response to a sexual assault of a fan at a Nirvana concert. He loudly and wholeheartedly condemned the act. His fans did likewise.

The movement was so connected, they sought out the musicians wherever they could.

Why you should think of grunge more often

Whether you were a fan or you hated it, grunge left an impact. It transformed music. This transformation is something it shares something in common with all major changes to musical culture.

The spread of the music was viral. The community grew through the community sharing the information about something that mattered.

The mainstream looked in to see what was happening. But the grunge movement still remained the domain of the outsider to a certain extent. Despite the size of the movement itself.

And it contributed to giving Gen X the Gen X label.

Our current revolution is technology driven. And we don’t even realise the full extent of that. Our ability to publish content of any kind unprecedented.

Technology is allowing all kinds of businesses to take control of their marketing.

We push out social media and get real time feedback from customers. We run flash sales.

Customer education has become simpler. Content marketing can educate people who used to take a long time to buy anything quicker and with greater results.

If we make mistakes, we can make amends within the space of days. And we can find that mistake can go viral in seconds.

And we don’t have the one generation defined in an easy box and we know it. The wealth of information and how we can identify who and what we are is far too messy for that.

But we despite movements and cultural change and technology, we do cling to outdated assumptions about business. People still argue one form of marketing is better than another one. Or that some form of marketing is on the way out. That SEO is irrelevant and Facebook is dead. They said it about the radio and they said it when cars replaced horses, too.

We’ve gotten so used to the technology doing the heavy lifting, we’ve handed over some of the thinking to it, too.

Now grunge is alive and well in my CD collection and people know the songs. But the era of grunge has passed and many of us who were messy, troublesome and grungy are now a lot more sensible.

But don’t forget that movement message. That it’s OK to colour outside the lines. That people do want to feel connected to you emotionally. They want you to speak up for them and give them something to rally behind. That they don’t actually care if it’s perfect, as long as it’s a message they can get behind.

That’s if you’re willing to put yourself on the line.

So are you? Are you willing to keep the beat and break the rules too? Do you want to develop a content marketing strategy that works?

If you do, come and find me.